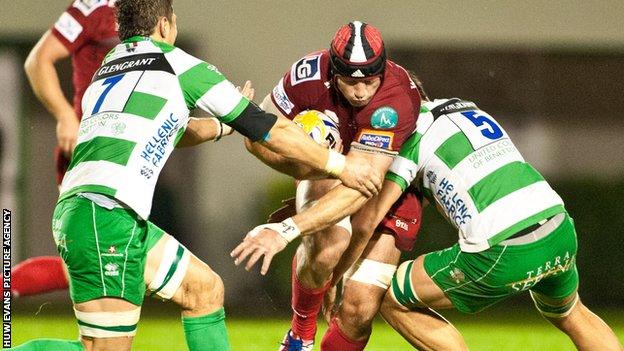 Treviso got back into the game with tries by Robert Barbieri and Fabio Semenzato.

They were trailing until the final minute when di Bernardo kept his nerve.

Rhys Priestland missed an early penalty but opened the scoring with a 13th-minute drop goal.

The Wales fly-half then added the conversion after Fenby powered over for the game's first try in the 27th minute.

The conversion was missed by Kris Burton, whose error then gave Fenby the opportunity to claim his second try.

The Scarlets wing touched down after twice kicking the ball forward, and Priestland's extras saw the visitors leading 17-5 at half-time.

That advantage was further extended by Priestland's 47th-minute penalty but Treviso were far from finished.

Replacement scrum-half Semenzato sneaked over on 51 minutes for his side's second try, converted by Di Bernardo.

The Scarlets were by now being penned back and Barbieri, scorer of two tries against Cardiff Blues, added a third try with 13 minutes remaining

Di Bernardo converted from out wide to cut the visitors advantage to one point and set up a thrilling finale.

Scarlets captain Rob McCusker was shown a yellow card with eight minutes remaining his side were to pay the price.

A penalty was awarded against Johnathan Edwards on the halfway and fly-half di Bernardo held his nerve to kick a 50-metre penalty right at the end.

The defeat was Scarlets' second successive Pro12 defeat but Simon Easterby's side remain second in the table.