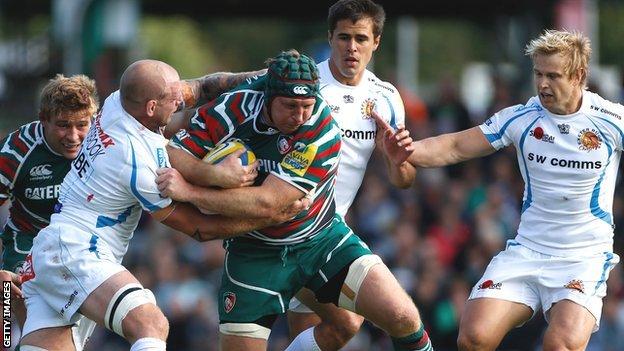 A hat-trick by Leicester debutant Adam Thompstone and 15 points from the boot of Toby Flood saw the Tigers back to winning ways at home to Exeter.

Thompstone got the hosts under way with a sixth-minute score after Ignacio Mieres landed a penalty.

The hosts' superior firepower up front ensured the former London Irish winger added a second soon after the break.

He added a third, from Matt Smith's grubber, before Ben White grabbed a deserved consolation at the death.

Tigers, who suffered a humiliating defeat at home to Premiership champions Harlequins last weekend, came into the match having gone 166 minutes without scoring a try.

They were forced into five late squad replacements and started nervously but Thompstone's opener in the corner settled the hosts after Mieres had put the Chiefs ahead in the second minute.

Flood, who had orchestrated the opening score, converted with aplomb from the touchline and added a penalty soon after to make it 10-3 with 13 minutes gone.

With the wind behind them, and facing an unfamiliar Tigers back three, Exeter looked to kick often but the normally reliable Mieres sent a 15th-minute penalty wide from halfway.

Tom Johnson engineered the Chiefs' first genuine opportunity that saw Ian Whitten clear through only for Smith's textbook cover tackle in the corner to save Leicester five points.

Tigers' superior forward power was evident as the game moved into its second quarter and, after Mieres saw another long-range shot at goal bounce off the post, Flood gave his side a 10-point lead with 10 minutes to go to the break.

Exeter's defence was roundly tested up to half time, with Tigers enjoying all the momentum, before Flood made it 16-3 with the final kick of the half.

Tigers were gifted a second try for Thompstone after Mieres fumbled a low pass from Hayden Thomas on his line, and Flood produced an improvised flick off the outside of his boot to Smith before the winger galloped in under the posts.

The simple conversion made it a 20-point margin and it should have been increased minutes later when Logovi'i Mulipola looked like he would round off a blistering 10-phase move.

But another superb cover tackle, this time from Mieres, saw the big prop knock the ball on over the line.

The Argentine went from hero to villain in the blink of an eye when he kicked a precious penalty in front of the posts to touch - only to send the ball dead.

The Chiefs showed plenty of ambition but with a burgeoning penalty count and their line-out in meltdown they faced an uphill battle.

Turnover ball led to Thompstone's third but it was created by a deft grubber kick by Smith that sat up for the winger, who cantered under the posts once more.

As the clock ran down Exeter came back and found themselves on Tigers' line when White pounced but Gareth Steenson's conversion attempt was one to forget.