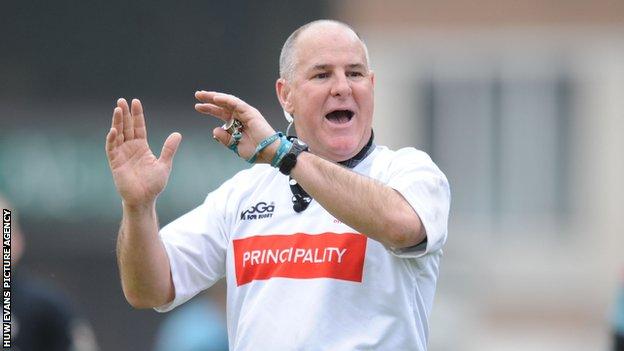 Referees boss Nigel Whitehouse says there is no need to change the law following the controversy of the Scarlets' disallowed try against Ospreys in their RaboDirect Pro12 game.

The Ospreys won 23-16 but Scarlets felt aggrieved Andy Fenby's first-half try was ruled out by the video referee.

Flanker George Stowers has since been cited for a high tackle on Fenby during the act of scoring.

"No it [the law] doesn't need changing," said Whitehouse.

He claims that under Law Six the television match official Derek Bevan, the former international referee, could have advised referee Leighton Hodges that an act of foul play had taken place.

TMO Bevan was asked simply by Hodges whether wing Andy Fenby scored a try "yes or no?"

Whitehouse backed the experienced Bevan but admitted that it was within the TMO's remit to offer the referee on the pitch further options.

"If there is one person that has done everything in the game it's Derek Bevan," Whitehouse said.

"He was right in what he said, but he could have gone a little bit further in his explanation to Leighton Hodges in relation to the foul play that was committed in goal, which caused the winger Fenby to actually lose the ball in the act of scoring a try."

Under rugby law, foul play has to take place in goal for the TMO to have jurisdiction.

Whitehouse, the WRU's referee performance and development officer, is now looking to discuss the issue with all parties concerned incluiding Scarlets head coach Simon Easterby who has called for clarity on the issue.

"It's great that situations do come out because it does raise debate and for the purpose of clarification across the game in Wales and indeed across Europe."

At the moment there are variations across world rugby with regards the powers of TMOs.

TMOs in domestic rugby in England and South Africa have wider powers of juridiction and can rule on issues such as knock-ons outside the dead ball area.

"Law Six is one of the variations across the globe. The current Pro12, European Cup and the Test matches going on around the globe are currently operating under the old system," exoplained Whithouse.

"It is only the Aviva Premiership [England] and the Currie Cup [South Africa] which are trialling these new variations.

"And hopefully at the end of the season the IRB [International Rugby Board] will come to some sort of agreement into a concrete protocol for the TMO to extend his [role] in the game."

Whitehouse said there are three questions a referee can ask a TMO.

"One: 'is it a try, yes or no?'. Secondly: 'is there any reason why I can't award the try?', and thirdly: 'but for an act of foul play would a try have probably been scored?'

"That third question can be encompassed into the first two questions.

"On Friday's game we had the question from Leighton Hodges to the TMO 'is it a try, yes or no?'

"Quite rightly the ball was knocked on. But at the time foul play was actually committed and the ball was lost because of that act of foul play.

"And the TMO on his jurisdiction can come and inform the referee of that."