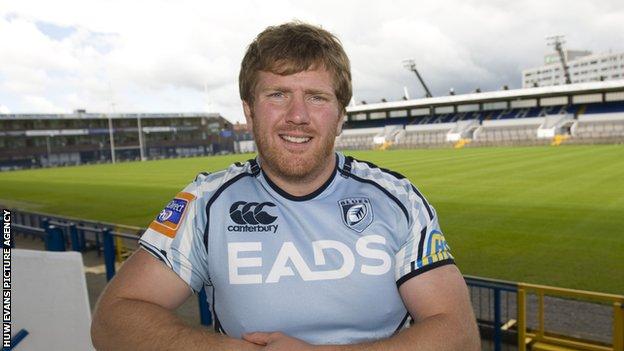 Cardiff Blues hooker Andy Kyriacou admits it will be a difficult occasion when he faces his former Ulster team-mates in the Pro12 on Friday.

The game in Cardiff will be Ulster's first match since their 22-year-old centre Nevin Spence, his brother and father died after falling into a slurry pit at their farm in County Down.

"I'm sure he has left a huge hole in the squad over there," said Kyriacou.

"I know I'll miss him and I'm sure everyone who knew him will miss him."

There will be a minute's silence at Cardiff Arms Park as a tribute to Spence.

Kyriacou, 29, played alongside Spence at Ulster and says it has been a difficult build-up to a match that would have otherwise involved some light-hearted goading between himself and his former team-mates.

"It's been very quiet this week," he said. "It's just been such a difficult time for everyone.

"I think they will keep themselves to themselves and any talking will be done through rugby rather than banter this time.

"The big tribute they can provide for Nev is to keep winning - the way they are doing at the minute.

"We obviously want to win at the weekend, but winning some silverware at Ulster will be a big tribute to Nev."

Kyriacou, who played 47 games for Ulster between 2009 and 2012, admits he has struggled to come to terms with Spence's death.

He said: "I just can't really get my head round it and I'm sure a lot of them are the same.

"It is a great loss to the game - he was without doubt one of the best professionals I have ever worked with and he was only a young kid.

"He was totally focused and a serious talent that was coming through.

"I think everyone in Europe saw him as the guy who would be coming through for Ireland in that 12 shirt in the future.

"He was 100% and flat out every single time he took to the field. He was just a good kid.

"[He told] terrible jokes - worse than you get in Christmas crackers, but still everyone loved him being around because he just absolutely lifted the place."