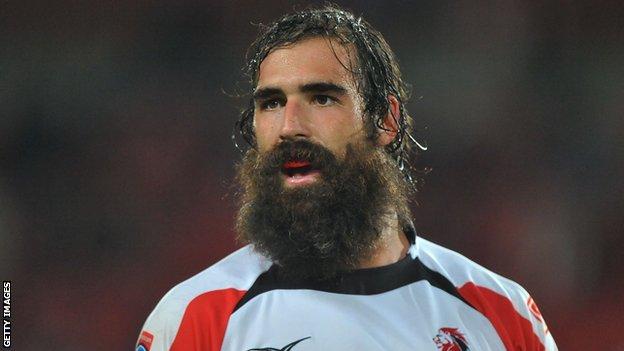 New arrival Josh Strauss aims to use his considerable power at the breakdown to add to Glasgow's attacking arsenal.

"For us, quick ball is key to get the backs going and Glasgow have some nippy and exciting players," said Strauss.

"In South Africa you put big emphasis on getting to the breakdown and keeping the opposition away. If we can be quick and tough there, we'll make it a lot easier for ourselves."

having spent last season with the Lions in his homeland.

But he has played in Europe before, having turned out for French outfit Lons-le-Saunier in the early stages of his career.

"That helped my game immensely," he told BBC Scotland. "When I came back I was a mature player.

"I was 20-years-old and playing in the senior division [at Federal level], with some really tough old players.

"I had to grow up very quickly."

Strauss has only been training with his new team-mates since Sunday but does not anticipate any problems fitting into Gregor Townsend's team.

"The game is becoming more similar all over the world, with increased professionalism and coaches moving all around the world," he explained.

"Back when I was playing in France the rugby felt a little bit slower. In South Africa it's a very quick game, you just spread it wide the whole time.

"Here it's a little bit slower and that's when the physical side comes into it and you have to man up.

"From what I saw against Connacht last Friday, the officials are maybe a little more lenient at the breakdown. They give you more time to compete for the ball.

"In South Africa, you have a second and if you are not away it's blown up."

On Friday, Strauss will be joined in the back row by former All Black Angus Macdonald and captain for the evening, Chris Fusaro.

"It's tough having to learn a whole new playbook and new calls in the first week," added Strauss, who captained the Golden Lions to Currie Cup success last term.

"I've been doing my homework but I think we are keeping it fairly simple for Friday.

"Training has been good and I'll soon get used to the guys out on the pitch."