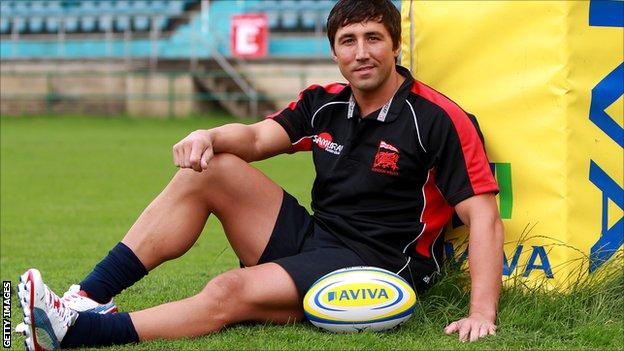 London Welsh fly-half Gavin Henson is expected to make his debut against Stade Francais in the European Challenge Cup on 13 October.

The Welshman has been out of action for over a month after suffering a minor fracture to his cheekbone in a pre-season friendly against the Scarlets.

"Gavin is training with us at the moment," head coach Lyn Jones told BBC Radio Wales.

"He's back on the field and running around, but just no contact yet."

Henson, 30, joined the club in the summer, after being sacked by Cardiff Blues in April.

"He's going to be fit for contact on 6 October and he's going to be involved, probably, in our first Amlin game against Stade Francais," added Jones, who previously worked with Henson at the Ospreys.

"He's excited and we're all excited to have him back. We are just utilising him at the moment, and he's helping some of our back-three players improve their kicking and he's enjoying that responsibility."

In Henson's absence they have won two of their opening four Premiership matches.