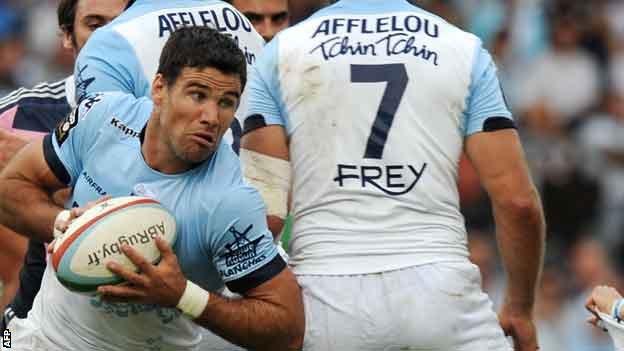 The club told BBC Wales Sport that Phillips, 30, and France wing Cedric Heymans are both suspended.

In a statement, Bayonne said: "The off-field behaviour of Mike Phillips is unacceptable and he has been fined. He has also been suspended until further notice."

Just because some are bigger names, it does not mean they are protected and above the group

In reference to the allegations against Phillips, Bayonne president Alain Afflelou is also reported to have told the French sports daily L'Equipe: "It is not the first time, I'm sick of it."

The statement added: "All players are now warned, the club will no longer allow misconduct on the part of players and they may be exposed to greater penalties.

"We have enough quality young players at the club. Just because some are bigger names, it does not mean they are protected and above the group.

"Through these measures, I also want to preserve the vast majority of players who give back and get involved on a daily basis for the good of the club.

"Finally, it is to respect the fans who invest in and support their team."

Earlier in the week Bayonne announced 2009 British and Irish Lion Phillips was to undergo surgery to a hand following an injury suffered in training.

That meant he would in any case sit out their Basque derby at Biarritz on Sunday.

Bayonne are sitting second from bottom of the French Top 14 with seven points from six games.

The Bayonne suspension comes 15 months after the former Llanelli, Scarlets, Cardiff Blues and Liberty Stadium star was suspended by Wales.