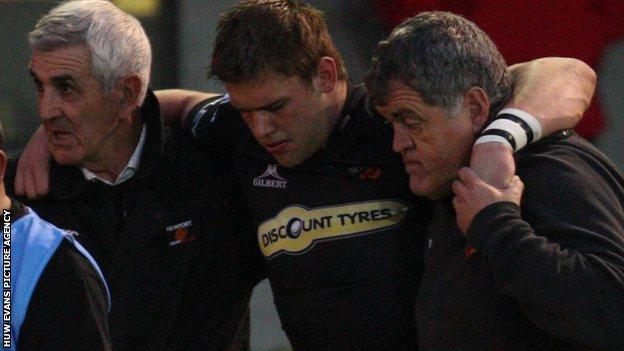 Wales flanker Dan Lydiate could return from a fractured ankle in time for a late bid for a 2013 British and Irish Lions tour place to Australia.

Newport Gwent Dragons coach Darren Edwards is unsure if Lydiate could return before Wales end their 2013 Six Nations against England at the Millennium Stadium on 16 March.

But added: "He's got a real good chance of playing again this season."

Lydiate suffered the injury the Dragons' Pro12 win over Edinburgh.

The flanker, 24, has undergone surgery, but the injury is not as bad as first feared, with no dislocation and no ligament damage.

"The extent of the injury could have been worse, but fortunately for us and for him now he's got a real good chance of playing again this season and making a good comeback," said Edwards.

The Wales flanker, capped 27 times, was helped off three minutes into the Dragons' 32-12 win at Rodney Parade.

Earlier, after visiting Lydiate in hospital, Dragons director of rugby Robert Beale said: "He's in good spirits, there was no dislocation to the ankle and no ligament damage.

"He's had a metal plate inserted which may or may not have to come out in future, but avoiding ligament damage is certainly a massive bonus."

Lydiate was named Six Nations player of the tournament in their 2012 Grand Slam campaign.