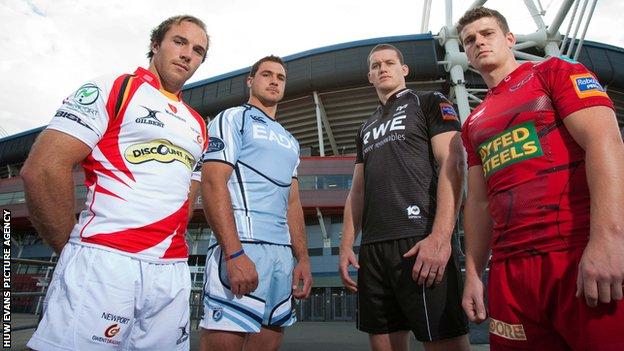 Lewis has rebutted Brown's accusation that the regions are being allowed to "bleed to death".

But Moffett says Lewis is "keeping the game poor" to reduce the Millennium Stadium debt, which stands at £19m.

What you need to do is actually keep the game vibrant, especially financially."

The WRU's annual report says money owed on the Cardiff venue has been reduced from about £75m when the ground was built in 1999.

From October, 2008 until May, 2009 Moffett was was chief executive of Regional Rugby Wales, the body that represents Cardiff Blues, the Scarlets, Newport Gwent Dragons and Ospreys.

Moffett told BBC Radio Wales: "In chasing the debt repayment, he's [Lewis] keeping the game poor, not only at the professional level, but also at the club level.

"And that's not going to do anybody any good.

"And I don't understand why the [Welsh] Rugby Union is actually taking that line.

"It just doesn't make any sense to keep the game poor just so that you can say, 'well, we'll be debt-free by 2020 or whatever it is'.

"Because you don't need to do that. What you need to do is actually keep the game vibrant, especially financially."

Brown, now a non-executive director of the Newport Gwent Dragons, has called on the WRU to give more financial support to Wales' four regional sides.

But the WRU claims it invests more than £15m a year in the regions.

"I think Tony is a bit lost in action here," said WRU's Lewis.

"He has only attended one meeting with the Welsh Rugby Union and the four regions over the last six years - that took place this year.

"So, I didn't quite know what to make of Tony's comments there because we have been working hard with the people who are at the sharp end of regional rugby."

Lewis was responding to Brown, who claimed: "The regions need more help from the WRU."

The WRU has released its own annual report, which includes details of a record turnover of £63m last year.

It seems appalling to me that while the WRU appear to be extremely well-off, the regions are bleeding

Brown is rumoured to have spent in the region of £10m when he was the millionaire backer of Newport Rugby Club.

He signed Gary Teichmann, the former South Africa skipper, in 1999 and Springboks star Percy Montgomery in 2002 during his four-year stint in charge at Rodney Parade.

The four regions - the Newport Gwent Dragons, the Cardiff Blues, the Ospreys and the Scarlets - have imposed a £3.5m salary cap and a host of Test stars have left Wales to collect higher wages.

Dwindling crowds are another concern for the regions, who had an average of fewer than 8,000 spectators in Pro12 competition last season, although season ticket sales for the new season have been encouraging.

Brown has voiced his fears about the state of regional rugby in Wales and the funding by the WRU.

"There is not enough dialogue between the WRU and the four regions," Brown told the Rugby Paper.

"It seems appalling to me that while the WRU appear to be extremely well-off, the regions are bleeding.

"The WRU are paying off the debt on the Millennium Stadium 30 years earlier than scheduled and in the meantime regional rugby is costing the regions an arm and a leg."

He claims the Welsh regions will struggle on the European stage and points to how well the Irish provinces are doing in comparison.

"The opposite is true in Wales where we have a successful national team and the regions bleeding to death," said Brown.

"The regions need more help from the WRU. The amount of time an international player can spend with his region is very limited.

"There needs to be some sort of contractual arrangement between the two parties."

Scarlets chief executive Mark Davies insists the WRU and the regions are working together effectively to fund the Welsh game.

"If we simply move money from A to B anywhere within Welsh rugby it doesn't necessarily improve Welsh rugby."

The WRU and the four Welsh regions' financial review of professional rugby has been completed.

The review by accountants Price Waterhouse Coopers was commissioned in December 2011.

The report has examined all aspects of professional rugby in Wales and the "tough economic challenges" facing Welsh rugby and has taken eight months to complete.

The WRU and the Welsh regions are expected to make an announcement on the report in the coming weeks.