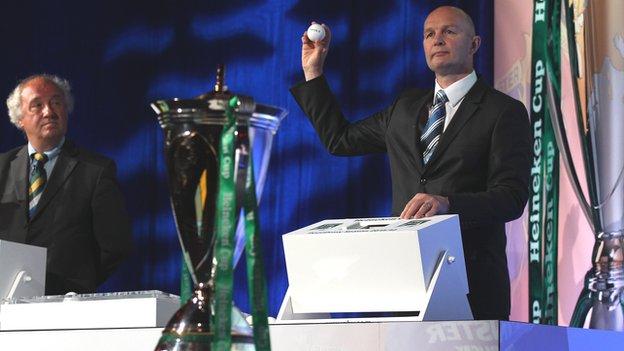 Heineken Cup boss Derek McGrath says he hopes the issues surrounding the future of the competition will be resolved "within six to nine months".

English and French clubs have announced their intention to pull out from 2014, while a row over English TV rights has further inflamed the situation.

More talks will take place on 8 October and McGrath said: "What we recognise is that there's a lot of ambition to make these tournaments better.

"Our discussions have just begun."

Speaking to BBC Sport, the chief executive of tournament organisers European Rugby Cup (ERC) continued: "All the parties want to make decisions, and as quickly as possible."

But he added that it was important "not to rush" into any decision surrounding the future of European club rugby union's premier competition.

European Rugby Cup organises the Heineken Cup and the European Challenge Cup. Its members are:

English and French clubs have served notice to quit and say they want changes to the way the tournaments are run, notably a reduction in the number of RaboDirect Pro12 clubs who qualify for the Heineken Cup.

English clubs have also sold their TV rights to European competitions to BT Vision from 2014, although ERC insists only it can sell TV rights, and has agreed a deal with Sky Sports from the 2014-15 season.

McGrath said the row was a result of ambition to improve the competition being expressed in "negative terms".

He said the key to successfully concluding a new agreement was "to bring all those dreams, pressures, energies and visions to the table and settle them down to an agenda".

He added: "We've done this before. In 2007 we discussed all of these points, everything that we are discussing now, as part of a process."

But he insisted that the English clubs' new TV deal for European competitions breaks International Rugby Board regulations.

"ERC has made a decision to renew a partner. Sky Sports have been a massive part of the growth of our tournament. We don't understand how any other rights could be sold under the International Rugby Board regulations," he said.