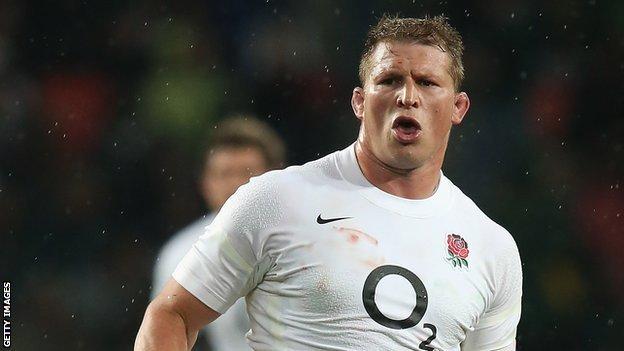 England are short of options at hooker, but Hartley should be fit for the upcoming autumn internationals.

"He had it checked [on Monday] and has a very small hairline fracture to the eye socket so it's disappointing," said Saints director of rugby Jim Mallinder.

Hartley, who has played in all five Premiership fixtures for top-of-the-table Northampton this season, has definitely been ruled out of this weekend's trip to London Irish.

"He will probably miss this week. If we look after him, then he should be OK for a couple of weeks' time," added Mallinder.

England head coach Stuart Lancaster will be hoping Hartley, who has 45 caps, will prove his fitness ahead of a series of fixtures against Fiji, Australia, South Africa and New Zealand.

They are short of experienced cover in the front row following Lee Mears' decision to retire from international duty and his Bath team-mate Rob Webber's current shoulder injury, with the uncapped Saxons duo of Harlequins' Joe Gray and Leicester's Tom Youngs next in line.

Hartley has been an influential presence for Lancaster, starting all of his country's Six Nations games and three Test matches in South Africa this year.

And he stood in as captain for the injured Chris Robshaw for the final Test against the Springboks, which finished in a 14-14 draw.

Lancaster has not for the autumn internationals.