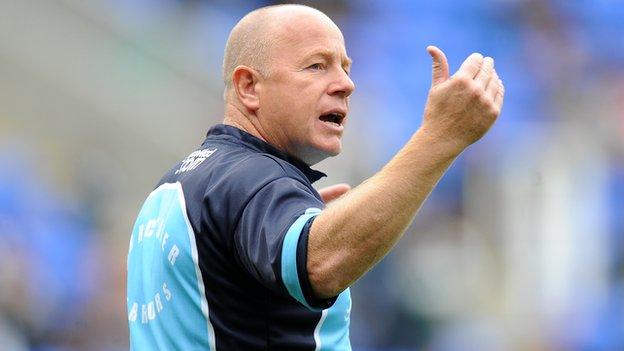 Worcester head coach Richard Hill says inspired his side to their first Premiership win of the season, against London Irish.

"Last year we would have been content to win and be relieved," Hill told BBC Hereford & Worcester.

"Now the mentality is different. They want to go on and score another try."

Hill added: "The players have worked hard on this attacking game and you can see some of the flair coming through. They are trying different things.

"And the really promising thing for me was that, after scoring three tries, everybody was running back and they wanted that fourth one.

"We had a little chat before the game and said that if a team lacked confidence then, at 37-3 down at Northampton, things would have gone horribly wrong as players' heads would have gone down."

"But they thought, 'no, we are better than this, we are going to go back and score'.

"There was a hunger go to back and score one, two or three tries so that is a team that has got confidence."

Having seen his side score eight tries in their last two Premiership outings, after only four from their first three games, Hill now takes his men to Adams Park on Sunday to take on Wasps, before a home game with Sale which will be the prelude to the break for European action.

"We should be going into Wasps confidently but, again, that's a tough place to go," said Hill.

"We won down there last year when we ground it out 6-0, so hopefully it will be slightly different circumstances this time and a bit more entertaining.

"The players will go in confidently as the dressing room is very buoyant at the moment."