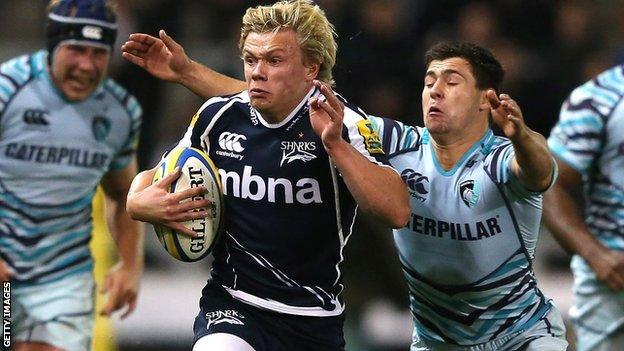 England scrum-half Ben Youngs scored a try in his first game of the season as Leicester fought back to condemn Sale to a sixth straight Premiership defeat.

The hosts dominated the first half and Rob Miller's score was added to by Nick McLeod's penalty, while Tigers replied with two George Ford penalties.

But Sale's 8-6 half-time lead was wiped out as Youngs went over in the corner.

And Ford took his tally to 15 points with three more penalties to leave Sale rooted to the bottom of the table.

Winless Sale started well but the longer the game went on the more Leicester's power up front began to tell, and the hosts' cause was not helped by a disallowed first-half try when Will Addison was ruled to have knocked on in the act of scoring.

Sale are three points adrift of 11th-placed London Irish, who have a game in hand against Northampton on Saturday, while third-placed Leicester move to with two points of leaders Saints.

The home side looked the stronger of the two teams in the opening five minutes and had all the possession.

The Leicester defence initially held firm but it was no surprise when Sale took the lead following a neat move down the right-hand side finished off by Miller - a try which had to go to the TMO - before McLeod missed the conversion attempt.

Leicester's first spell of pressure resulted in Ford landing a penalty but McLeod quickly replied with his first successful kick to put Sale 8-3 ahead.

Ford closed the gap again with his second penalty but Tigers were then dealt a below when Vereniki Goneva was shown a yellow card for a deliberate knock-on.

Sale thought they had scored through Addison, but the TMO ruled in favour of the visitors, and the home side had to settle for a two-point half-time lead.

Despite Leicester's lack of creativity, they took the lead when Ford kicked his third penalty of the night after the break.

Moments later Richard Thorpe sent Youngs, back after a shoulder injury, clear to score on the overlap, although Ford missed the conversion.

The teenage fly-half was successful with a 40m penalty soon after to stretch the Tigers' lead to nine points and, as the half wore on, their pack became ever more dominant.

Sale had hooker Joe Ward yellow carded following a melee at a scrum and Ford's kick made it 20-8 and secured Leicester's fourth win of the season.

"I'm a lot happier. There were just a couple of crucial passes again that didn't happen. We needed to get that try just before half-time and build a little bit of a cushion.

"We knew they had a strong bench and we knew we would be under the cosh a little bit in the second half.

"We just had a bad start to the second and never really recovered. George Ford for them just kept kicking them into positions and that made it harder."

"I thought Sale played really, really well and put us under a huge amount of pressure, and we dealt with that sin-binning in the first half.

"We thought it was a pretty soft try to concede, but we were under pressure the whole time and didn't have any ball in the first half.

"They were very good for their lead at half-time, but I thought our boys kept their composure. It's a good win as they were obviously desperate for the win."