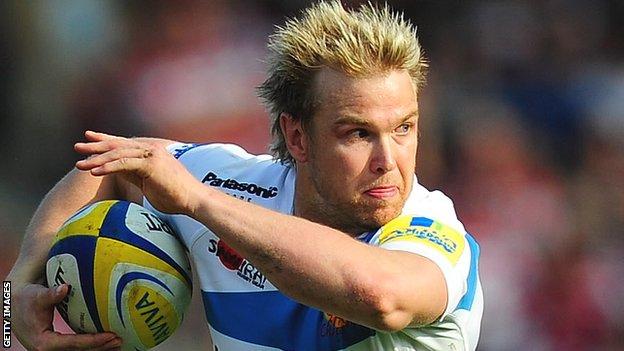 Brett Sturgess's try put the hosts ahead, but last season's champions hit back to lead 18-16 at half-time with scores from Ugo Monye and Nick Evans.

Home centre Shoemark's double was added to by tries from Ben White and Sireli Naqelevuki, while Gareth Steenson took his tally to 17 with the boot.

Karl Dickson went over for the visitors but Exeter claimed a famous victory.

The hosts, playing in their 50th Premiership match, went ahead with Steenson's 25-metre kick but Evans, who had earlier missed his first attempt at goal, levelled the scores.

Exeter scored the game's first try, Sturgess running round behind the posts after good work from Luke Arscott and Phil Dollman.

Streenson added the extras and a penalty but Evans kept Quins in touch with his second penalty.

Evans then charged down Steenson's clearance kick to touch down but failed to add the conversion, before Steenson extended Exeter's lead with his second penalty.

Monye's fourth try of the season and a successful conversion from Evans gave Quins a two-point half-time lead.

White then went over from close range, converted by Steenson, to swing the game Exeter's way but Rory Clegg, who also added the extras, fed Dickson to regain the lead for the visitors.

But the home side were forced to defend their line with some strong tackles as the game went into the final 10 minutes.

They then gave away a penalty, Clegg landing his second kick to give his side a possible losing bonus point.

Chiefs lock forward Mumm was yellow carded in the final minute but his side held on.

"The best thing from my perspective is the mental challenges we came through. The way we just got on with the game today was absolutely fantastic.

"The way they played today, I just can't give them enough credit.

"I don't think there are any guys now that you can consider as guaranteed starters, we've got a strong squad and it's about having faith in guys that are on form and making sure you make best use of your squad."

"We were rubbish. We were really poor. All the credit goes to Exeter for the way they played and we probably should have been beaten by a lot more.

"You don't mind coming and losing here because it is a tough place to come at the best of times.

"We will learn a massive lesson in terms of what our desire needs to be if we are going to be up there where we want to be and will be at the end of the season.

"So this will be taken on the chin and the reaction will start next week. I don't care about results, I care about performance. And today our levels of performance were not right."