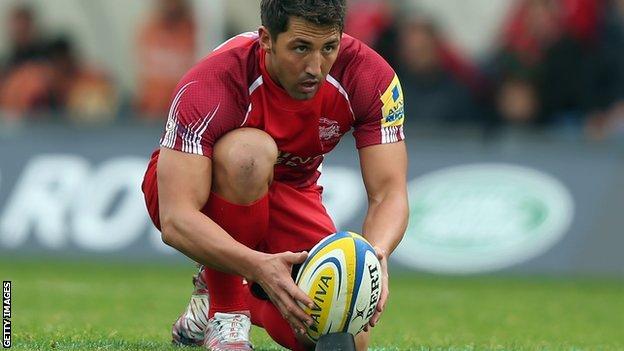 Henson slotted three penalties and two conversions on his competitive debut but it proved to be in vain.

Sarries led at the break thanks to 19 points from Hodgson after Phil MacKenzie had touched down for the hosts early on.

Sunday's encounter was the first competitive meeting between the two teams for 24 years.

They last met in a pre-season friendly in August 2009 at Old Albanians with Saracens running out 24-16 winners.

Despite having lock Matt Corker yellow-carded in the fourth minute, the hosts took an early lead when MacKenzie kicked a loose ball deep into Saracens territory and won the race to collect and cross the line.

"I thought for his first game back in God knows how long, his performance was very good. He was hugely influential

Welsh started conceding a serious number of penalties and Hodgson, after striking the post from 50 metres in the 10th minute, pulled back three points with a straightforward kick from the 22-metre line five minutes later.

The visitors went ahead when Hodgson took a short pass from scrum-half Richard Wigglesworth, stepped inside and raced over between the posts before adding the conversion.

Hodgson stretched the lead with a penalty from 48 metres but, within two minutes, Henson cancelled it out when Sarries strayed offside 40 metres from their posts.

But Hodgson struck two more penalties before half-time, with Henson pulling another back to restrict the visitors to a 19-13 lead at the interval.

Two more penalties from Hodgson increased Saracens' lead to 25-13 before Henson kicked his third penalty in the 60th minute.

Welsh looked to have set up an exciting finale when left wing Nick Scott made a superb break from the halfway line before passing inside to full-back Arscott, who raced clear of the Saracens defence, cut inside and touched down behind the posts to leave Henson a simple conversion.

Hodgson landed his seventh penalty four minutes from time but it was not enough to deny the Exiles the hard-fought consolation point they deserved for their never-say-die efforts.

Saracens were left to finish the match defending desperately but, despite conceding three penalties, they survived a series of late drives by the home forwards to hang on to their lead.

(On Gavin Henson) "I thought for his first game back in God knows how long, his performance was very good. He was hugely influential.

"To play as badly as we did and come away with a losing bonus point is a plus.

"Saracens are a quality side and they played very well today."

"After 60 minutes everything was good and it should have been more comfortable than it was.

"We are round about where we want to be in the Premiership.

"We have rotated the squad sensibly in the first six games and we are fresh."