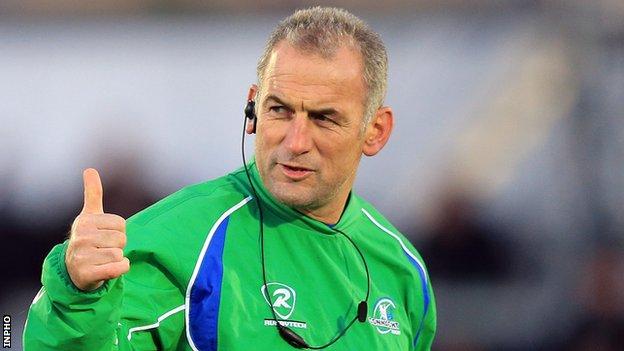 Connacht coach Eric Elwood has confirmed that he will leave the post at the end of this season.

Former Ireland fly-half Elwood has given 24 years of service as a player and coach to his native province.

"It is a decision that I have not made lightly - this has nothing to do with any on field issues or performances or anything off the field."

He added: "Connacht has progressed enormously in the last couple of years and I can only see that continuing, but for me personally the time is right to step aside at the end of this season and let someone else take things on.

"It is my decision and no-one else's. I have not been under any pressure to step down and I have always received great support from the IRFU, the Professional Game Board and everyone involved with Connacht."

Elwood played for Connacht for 16 seasons and a five-year stint as assistant coach was followed by him taking the senior coaching role in 2010.

Only last Friday, Connacht achieved one of the best wins of Elwood's reign when they defeated Heineken Cup champions Leinster 34-6 in the Pro12.

Under Elwood, the Irish province achieved their best ever Celtic League finish of eighth last season.

Connacht operate on a significantly lower budget than the three other Irish provinces.

Elwood is currently the only native Irish coach in charge of one of the four provinces.

Galway native and former Ireland coach Eddie O'Sullivan is among those tipped to succeed Elwood.