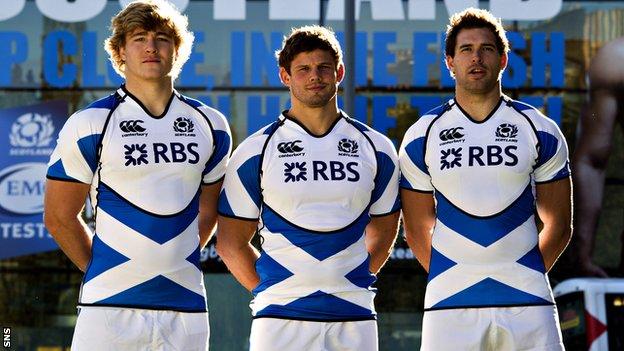 Captain Ross Ford thinks Scotland can earn a first-ever win over New Zealand when the autumn Test series kicks off at Murrayfield next month.

"We go into every game believing that we can win," the Edinburgh hooker told BBC Scotland.

"It's a great opportunity to play against the best team in the world and everyone will be raring to go.

"It will take an 80-minute performance out of the top drawer, but that's what we have been working on."

Reigning world champions New Zealand visit Edinburgh on 11 November, with matches against South Africa and Tonga to follow - all of the action being shown on BBC television.

Following their World Cup success on home soil, New Zealand can complete a clean-sweep in the inaugural Rugby Championship, the expanded Tri-Nations, when they face South Africa in Pretoria on Saturday.

"Everyone is excited about the match," added Ford, who led the Scots to summer wins in Australia, Fiji and Samoa.

"We want to perform well and do Scotland proud. We've been working on our consistency and repeating our good work.

"We've just got to make sure that happens against the All Blacks because it will take that to beat them."

Sean Lamont joined Ford and Dave Denton to model Scotland's new away kit and the experienced winger has been heartened by the early season form of Glasgow Warriors and Edinburgh.

"Both teams have started quite well and long may it continue," said the Glasgow back.

"Glasgow finished top four last year and that's our aim again - and to take it further.

"Edinburgh will look to replicate their Heineken Cup success and improve on their league standing.

"It's good for Scottish rugby, we need the level improving to attract bigger crowds and that way the game keeps moving forward."