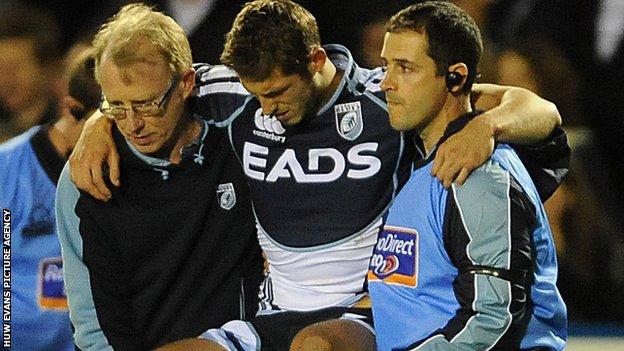 Fly-half Jason Tovey is likely to be back in action in a few weeks after Cardiff Blues revealed his knee injury is not as serious as first feared.

Tovey suffered the injury during the Blues' defeat to Ulster.

The Blues had feared the 23-year-old would be out for several months but tests have shown there is no serious damage.

"[There's] nothing broken which is a huge, huge relief for everybody," said Blues coach Phil Davies.

"He's got a bit of a strain to the a little muscle behind the knee which is causing him a few problems but nothing major at all.

"I think it's a couple of weeks and hopefully Jason will be back playing."

Tovey's first start for the Blues since joining from Newport Gwent Dragons ended prematurely when he twisted his leg in a tackle and he was helped off the field four minutes before the interval against Ulster.

The news will be a boost for the Blues who will be without another fly-half, Rhys Patchell for up to six weeks.

The 19-year-old suffered a shoulder injury during the Blues' win over Treviso and is expected to be out until mid-November.