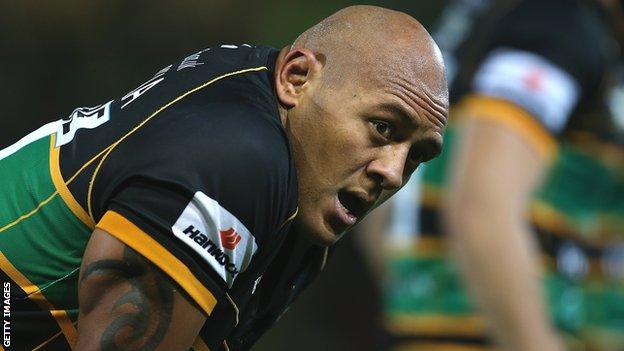 Northampton prop Soane Tonga'uiha says their forwards can become the best pack the club have had in years.

Saints, who have won all five matches this season, used their dominant scrum to reach a Premiership semi-final and Heineken Cup final in 2010-11.

Tonga'uiha told BBC Northampton: "As a pack, we were unstoppable at times, but we weren't as dominant last season.

"There's a lot for us to work on. Once we get those things right, we'll better the pack we had a few years ago."

He added: "The pack are excited by the challenges ahead of us."

Saints have been bolstered by the return to fitness of Tom Wood and Courtney Lawes.

However, hooker Dylan Hartley will miss at least one match due to a hairline fracture to his eye socket with 20-year-old Mike Haywood set to deputise.

"Tom has been injured at the wrong times in the last two years, at the end of the season," said Tonga'uiha.

"Courtney has been out for quite some time as well and it's brilliant for both of them to be back playing, doing what they do best - smashing people and stealing ball.

"It's unfortunate for Dylan to have his injury, but when Mike came on, on Saturday, nothing changed. He's still a young player but he's a leader in his own right.

"He takes charge of the scrums and he knows how Brian, Paul Doran-Jones and I work; he's got to step up and talk because no-one else will in the front row.

"It's an opportunity for Mike to show what he can do and its something he's been waiting for."