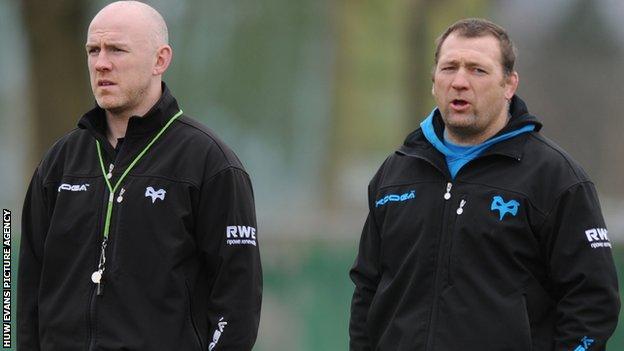 Welsh regions will be at a disadvantage for crucial Heineken Cup ties, according to Ospreys forwards coach Jonathan Humphreys.

French clubs will have an extra week to prepare for their Heineken Cup ties.

"It would be great if we had the same opportunity as Toulouse will have to prepare their team," said Humphreys.

"We'll probably have two sessions together after the boys have been away for five weeks.

"It's certainly not ideal for preparation."

The third round of Heineken Cup games follows Wales' fourth and final Test of the autumn series.

Australia will be the visitors to Cardiff's Millennium Stadium on 1 December for a game that falls outside the International Rugby Board window for Test matches.

As many as 12 Ospreys players could be could be involved with the Wales squad.

French clubs will then play a round of Top 14 matches on 29 November before turning their attention to the Heineken Cup ties.

When asked if the situation will mean the Welsh regions will start at a disadvantage, Humphreys replied: "It certainly looks like that."

He added that a better structured season would be desirable.

"It would be nice, but I deal with the cards dealt to me," said the former Wales captain.

"I'm not an administrator, I don't deal in the politics of it. There are far more intelligent people who can deal with that than me."

Before the trip to France, Ospreys will begin their Heineken Cup campaign with games at home to Treviso on 12 October and away to Leicester on 21 October.