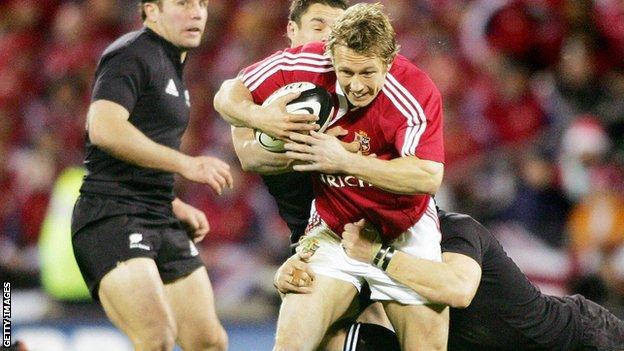 Former England fly-half Jonny Wilkinson says he would relish the chance to end his international career by playing for the British and Irish Lions on their tour of Australia next summer.

Lions coach Warren Gatland has hinted the 33-year-old could travel with the squad to Australia in June 2013.

"There's no way I could say no," Wilkinson admitted.

"In terms of what that represents, everything about it, it's enormous. Such a fabulous thing."

Wilkinson said he did not think he needed to be playing international rugby for England to feature for the Lions.

"It doesn't matter where you come from," he added. "You have got six weeks, get your boots on and get into it."

Wilkinson, who won 91 England caps, has taken part in two Lions tours, to Australia in 2001 and New Zealand in 2005. Both ended in defeat, which rankles with the player.

"It is niggling away at me," conceded Wilkinson, who played in four World Cups for England and won the tournament in 2003.

"All I can do is play and see if I fit into those plans. If I don't, I'll make the best of what I've got, which, let's face it, is good enough."

The last Lions tour was to South Africa in 2009. Wilkinson missed out through injury, while the Lions lost 2-1.

When Wales boss Gatland was named Lions coach in September, he said: "Wilkinson's still a fine player and only 33. That's not old.

"No one is ruled out or pencilled in. If you are playing well enough, then whoever it is - whether it is Jonny Wilkinson or whoever, it's all about how players are performing for their clubs or countries."