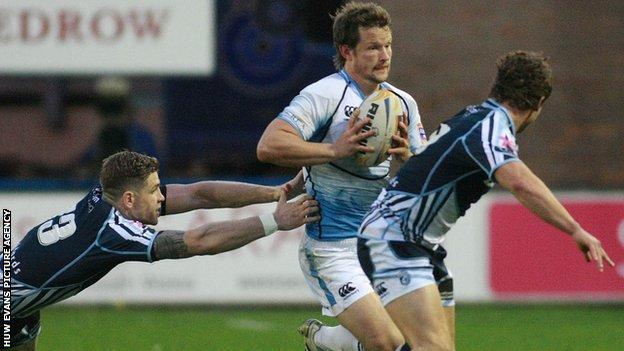 The visitors took full advantage of the hosts' vulnerable scrum with Horne kicking four shots in the opening period.

Leigh Halfpenny sent the Blues' lone penalty over shortly before the break.

But amid both teams' inability to cross the line, Horne ensured victory with two more penalties.

Horne's ability to capitalise on the penalties his side were able to pressurise from the Blues sent the Warriors into third place in the table.

Having suffered a record home defeat by Ulster in the previous round, Phil Davies' Blues were desperate to make amends.

But the visitors established control early on up front and maintained the stranglehold throughout.

The centre's next came after flanker John Barclay's long downfield kick and the third as Glasgow prevented the hosts from breaking into the visitors' territory.

With the Blues under pressure at the scrums, Italian referee Giuseppe Vivarini compounded their discomfort and misery with a succession of penalties.

Horne's fourth first-half penalty was the reward for his side and the Blues' next punishment.

Halfpenny, on his return from an ankle injury, kicked what were to prove his side's only points a minute before the break.

Summer prop recruit Campese Ma'afu was replaced at half-time by Taufa'ao Filise, but the Tongan fared little better than his Fijian squad-mate.

The Blues looked more promising in the second-half's early stages, but Horne ended up with the next scoring chance, which he took after the hosts offended at the breakdown.

Halfpenny, normally among the most reliable of players in all facets, also found his fortunes on the wane on this occasion.

He sent a penalty attempt past an upright.

Then the Wales and British and Irish Lions back-three player conceded the knock on while under no direct pressure that led to another scrum penalty that Horne converted.

A Filise charge gave Halfpenny the chance to show his attacking paces, but replacement Stuart Hogg dislodged the ball from the Welshman's grasp as he crossed the whitewash.

In the process Halfpenny took a blow to the head and played no further part.

Visiting hooker Dougie Hall was sin-binned for a professional foul amid a rare sustained pressure from the home side.

And Horne missed a kickable penalty while the hooker was off the field.

But the Blues were unable to make any further headway.

Glasgow head coach Gregor Townsend: "Without ever really cutting loose, we controlled the game and showed excellent discipline and determination.

"Our scrum was absolutely outstanding. Mike Cusack is going from strength to strength for us and once more delivered when it counted. The pack overall were first class and put us in a great position to go on and win the game.

"Peter Horne kicked very well and also showed his ability in a lot of other facets. It's great to get the win, and we now start preparing for what will be a huge test next Sunday in Northampton."