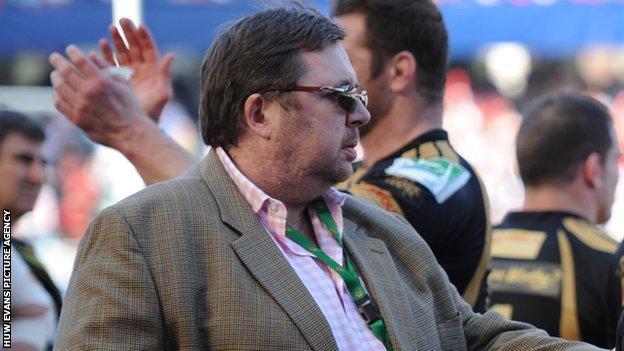 Mike Cuddy has relinquished his role as joint managing director of Ospreys after almost 10 years in the post.

A statement issued by the Welsh region said that Cuddy will also "step down from day to day management of the rugby operation".

However, Cuddy will remain as a director and shareholder.

Cuddy was instrumental in helping form the region in 2003 as Wales' old club system was revolutionsed.

He brought Neath into partnership with Swansea to form the Ospreys, with Welsh All Blacks coach Lyn Jones becoming head of playing affairs at the new team.

Jones, now London Welsh coach in the Aviva Premiership said: "I'm sure Mike will be sorely missed at the Ospreys.

"The commitment and the work that he's put in to rugby over the last 20 years [in the game] has been commendable and I'm sure rugby in Wales will see him again.

"Sometimes it's time to have a rest.

"But I'm sure there's a lot more to come from Mike in the future and I'm sure rugby will be a less colourful place without him.

"It cannot be underestimated how difficult a job that was, bringing two arch rivals together.

"But to do the best for rugby in Wales and the national side lots of people gave up a lot and Mike was to the fore of that, leading things and pushing things for the better of rugby.

"And people just don't remember how difficult it was.

"But his legacy will be remembered forever with the Ospreys."

The mutual decision is thought to have been reached so that Cuddy can focus on his business interests outside rugby which includes a Neath-based building and demolition firm.

The Ospreys statement read: "In common with the other regional sides in Wales, Ospreys Rugby has faced a significant number of challenges in the last few years including financial difficulties, some of which has been well documented.

"Following the successful conclusion of a number of initiatives which directors and shareholders have been involved in, Ospreys Rugby can now look forward confidently to a more stable future.

"Recognising this, and given the other commitments of some of the principal people involved in managing the organisation, Ospreys Rugby has taken the opportunity to reorganise its management structure.

"Mike Cuddy will step down from day to day management of the rugby operation and will also relinquish his position as a joint managing director with immediate effect. Roger Blyth and Andrew Hore will between them assume the duties previously undertaken by Mike Cuddy.

"Ospreys Rugby wish to thank Mike Cuddy for the efforts he has put in over the years since the region's formation.

"The changes announced today will lay the foundations for a more stable and prosperous future and allows the region to move forward with a high degree of confidence."