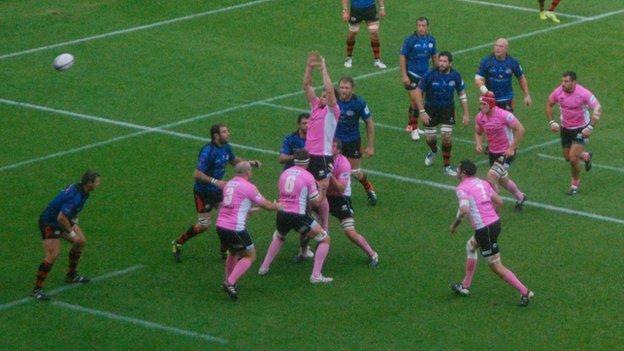 Nottingham eased to a 48-16 win over Championship strugglers Jersey to leave the islanders bottom of the table and still without a win this season.

The hosts led throughout, with tries from Andy Savage, Alex Shaw (2) and Rhys Crane, as well as a penalty-try.

Fly-half Michael Le Bourgeois, who grabbed Jersey's only try, scored all of his side's points.

I'm just gutted for the boys. We can't play like that and compete at Championship level

The islanders have now lost six in a row in their first ever season in the second tier.

They were in trouble early on after an awkwardly bouncing ball bobbled kindly into the path of full-back Savage who scored the opening try.

Shaw grabbed his first of the afternoon soon after to leave the visitors facing an uphill struggle to get anything from the game.

But they hit back through Le Bourgeois who touched down between the posts.

Jersey went in at half time with the score 23-13, but after the break Nottingham were a class above their Channel Island opposition.

A second for Shaw was followed by a penalty-try, which was awarded after numerous scrums and mounting pressure on Jersey's line.

That gave Nottingham the bonus point, but there was still time for winger Crane to touch down late in the game and seal the win which sees Nottingham climb to third in the Championship table.

"I'm just gutted for the boys, we can't play like that and compete at Championship level.

"We'll take positives from the game because I felt we played good in patches."