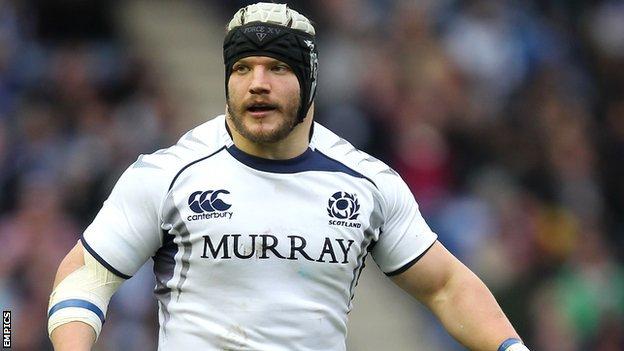 The 32-year-old, 47-times capped Scot, who has spent two months on loan at French Top 14 side Agen, will complete his move to Sixways next month.

"It's always been a difficult place to go as a player. It will be nice to have the fans right behind me," said Murray.

Euan Murray is looking forward to working with the players and coaching team we have assembled, in particular Phil Vickery who he toured with for the Lions

"I looked at the ambition at the Warriors. It's important to go somewhere where the set-up is right and everything is geared in the right direction. There is a big fan base and great facilities."

Murray, who has played Premiership rugby for both Northampton Saints and Newcastle, has featured for Scotland since making his debut against Romania in 2005.

But, as a devout Christian, the 6ft 1in front row has missed out on a number of caps because he chooses not to play on Sundays.

Murray played in both the 2007 and 2011 Rugby World Cups and also toured South Africa with the Lions in 2009 - only to be denied a cap by injury.

Warriors rugby operations director Corin Palmer added: "We are very pleased to be able to sign a player of both the pedigree and talent of Euan Murray.

"He is looking forward to working with the players and coaching team we have assembled, in particular Phil Vickery who he toured with for the Lions, and embracing the style of rugby we are looking to promote at Sixways."

Taumoepeau is yet to play this season, as he is still suffering from nerve pain following a neck operation.