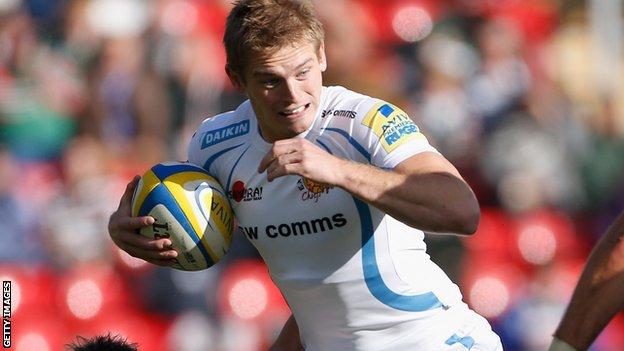 Exeter Chiefs fly-half Gareth Steenson says he is working hard to try to win back his place in the starting line-up.

The 28-year-old has yet to start any of his side's five Premiership matches this season but hopes to impress against Harlequins this weekend.

"You want to go out and perform and when you get to the opportunity you've got to take it," he told BBC Devon.

"Whether it's against Harlequins, or whether it's in an LV= Cup game, you've just got to go out and perform."

Steenson has found his chances limited over the past two seasons with Argentina international Ignacio Mieres becoming first choice at Sandy Park.

He last started a game in Exeter's final match of last season against Saracens.

"Right through the squad there's guys who can step in at any moment in time, especially in our position at 10," he said.

"You've just got to work hard on a week-to-week basis and whenever you get the opportunity you've got to step up to the mark.

"You want to play as many games as possible, but we live in a realistic world and the guys in every position are top quality players and when you get your chance you've just got to take it."