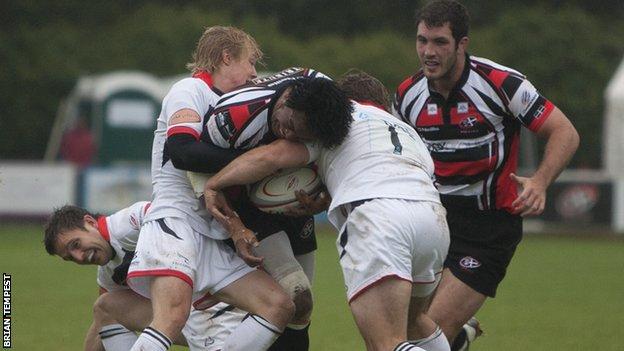 Cornish Pirates coach Harvey Biljon has put Saturday's last-gasp 25-24 loss at London Scottish down to his side straying off-strategy.

Pirates led the Exiles 24-10 and were in the hunt for a bonus point but lost when former Scotland fly-half Phil Godman slotted a final-minute penalty.

The Cornish side are now without a win in their last four Championship games.

Assistant coach Biljon said: "It's not a psychological issue. What we've got to do is stick to task."

He added: "We need to put ourselves under pressure in training and transfer that into games at the weekend and we'll be fine. We just need to put together a performance and slowly gather momentum.

"We've got to think about the British and Irish Cup for the next two weeks now and hopefully that will be refreshing after the league campaign. We have to put it right when the league starts again."

Ben Maidment, Jack Nowell and a penalty-try gave Pirates the advantage, but Scottish tries from Chevvy Pennycock (2) and Mark Bright - and Godman's boot - gave the London side victory.

"It hurts even more when it's taken away from you in the last play of the game. One minute we are potentially going for a maximum bonus point win, and we lose with a losing bonus point.

"In the first half we had a clear blueprint of what we needed to do and we stuck to task. At half time we spoke about sticking to task and doing the same again because we had proved it worked in the first half, but we didn't do that.

"We spoke about specific strategies for the second half and I've got to find out why we didn't do them."