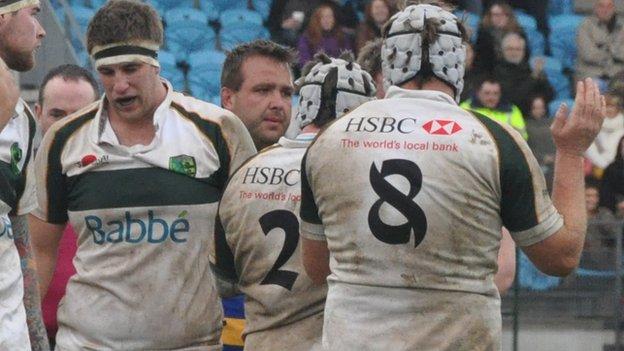 "I don't think this is our level. I never put a benchmark on it as I think you've always got to strive to be the best you can," he told BBC Guernsey.

I think we've got a really good side here and I don't think everyone gives us enough credit for how hard we work.

"My whole philosophy is to improve the team, and I think these guys are capable of that."

Reynolds continued: "I think when we came into this league this year, we talked about earning respect from every team, and after talking to Barnes [last weekend's opponents], they had the utmost respect for us.

"We've just got to keep proving that with results and just keep on knuckling down with every game that comes at us."

Last weekend, Guernsey were 12-0 ahead at the interval against league leaders Barnes before the visitors produced a second-half comeback to win 19-12.

Reynolds has urged his team need to learn the lessons of that defeat quickly, ahead of Saturday's match at Tonbridge.

"We probably gave them a little bit too much respect in the second half," he said. "We've got to go in [to this weekend's match] and field our strongest minds on the day.

"I think we've got a really good side here and I don't think everyone gives us enough credit for how hard we work."