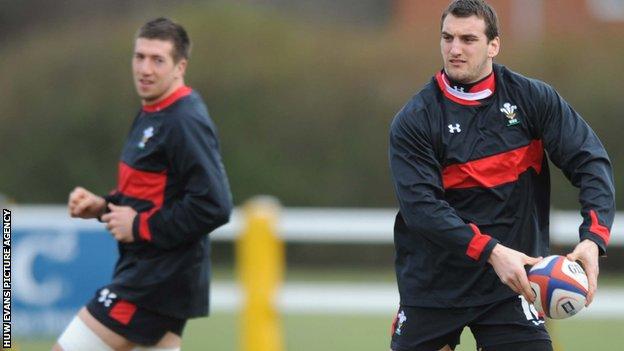 Sam Warburton says he does not know if he will be Wales captain for the autumn Test series.

The Cardiff Blues flanker led Wales to the 2011 World Cup semi-final in New Zealand and to the 2012 Six Nations Grand Slam.

Warren Gatland, the Wales coach, made him skipper in August 2011, but Warburton admits he does not take the role of skipper for granted.

I don't even now if I am still captain of Wales," admitted Warburton.

"You don't know until each campaign comes around... nothing is set in stone nowadays."

The competition around the Wales squad at the moment is immense

Warburton has been a mainstay in Gatland's starting line-up and led Wales on the summer tour of Australia, where they lost the Test series 3-0 to the Wallabies.

But for the first time since he accepted the captain's armband, Warburton's place in the side is threatened by the emergence of Ospreys openside flanker Justin Tipuric.

"The competition around the Wales squad at the moment is immense and you have to make sure you are on top of your game," said Warburton.

"I am on my toes and trying to play the best I can and make sure I stay injury free.

"You never know when that [losing the captaincy] could happen, but if it did happen I am sure it would be for the right reasons."

While Warburton is waiting for the phone call to confirm he is still skipper, from either Gatland or Wales caretaker coach Rob Howley, he remains favourite to be the British and Irish Lions captain.

Gatland has already been appointed Lions coach and Warburton is being talked about as his captain for the 2013 tour of Australia.

Warburton admits it would be a huge honour to lead the best of British and Irish rugby but claims he is only focused on his form with the Cardiff Blues and being selected for Wales' autumn Test series against Argentina, Samoa, New Zealand and Australia.

"Any player would admit it would be a massive honour, but there are so many hurdles to get over before that even comes," said Warburton.

"We have got Heineken Cup games, players have to be selected for the autumn, more Heineken Cup and the Six Nations

"There is a lot of rugby in front of the players who could be selected for the Lions. My focus at the moment is to make sure I stay injury free."