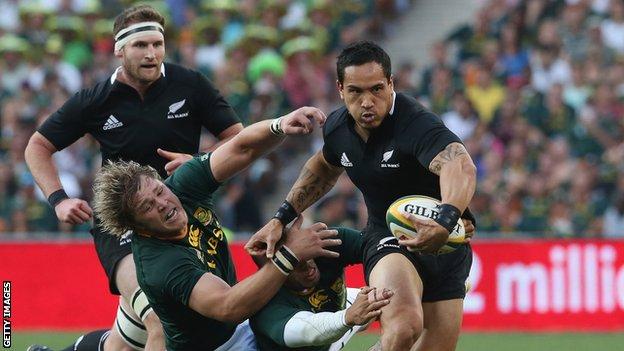 New Zealand finished off their victorious inaugural Rugby Championship campaign in style as their backs inspired a 32-16 win in South Africa.

Winger Bryan Habana got the hosts off to the perfect start, but visiting lock Sam Whitelock finished a sweeping move.

A converted Aaron Smith try saw his side take the lead, which Ma'a Nonu and Conrad Smith added to after the break.

In the other match, Mike Harris kicked 20 points as Australia edged out Argentina 25-19 to finish second.

The Wallabies had to dig deep against the spirited Pumas, their one try coming from Digby Ioane in the 65th minute with Harris converting.

The hosts battled back and set up a tense finish when Juan Jose Imhoff was driven over the line.

However, the game was perhaps most notable for being veteran prop Rodrigo Roncero's last game for Argentina.

Over 14 years, Roncero, who was substituted in the 73rd minute, appeared in three Rugby World Cups, helping the Pumas to their third-place finish in 2007.

Victory for the All Blacks means they have now extended their winning streak since last year's World Cup to 16 matches.

South Africa had no answer to the incision provided by winger Hosea Gear and full-back Israel Dagg as their defensive line was repeatedly breached on the counter-attack.

Not even a late yellow card for Dagg could help the Springboks back into the match at the Soccer City Stadium in Johannesburg as the All Blacks - who claimed the Rugby Championship title last weekend against Argentina - moved to within two games of the world record for continuous Test victories set by Lithuania in 2010.