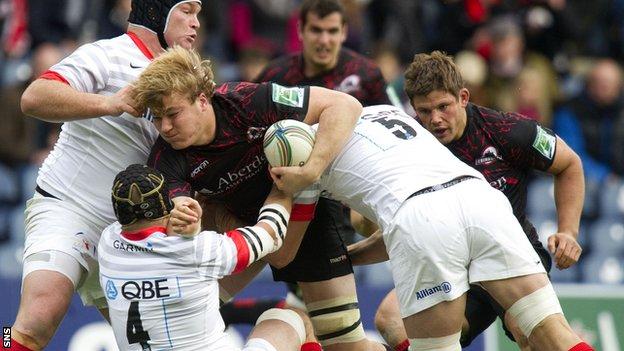 Saracens made an impressive start to their Heineken Cup campaign as they demolished Edinburgh at Murrayfield.

Joel Tomkins finished off a move from a quick tap-penalty as the visitors opened up a 16-0 half-time lead.

Owen Farrell slid in at the corner shortly after coming off the bench and Chris Ashton weaved in for a score.

Alex Goode made sure of a bonus-point and Charlie Hodgson, who was in fine form with the boot, completed the rout, charging down a Harry Leonard kick.

Hodgson landed four penalties and four conversions for a personal haul of 25 points.

Edinburgh saved their best form for this tournament last season, reaching the semi-finals, but Michael Bradley's side were completely outclassed as skipper Steve Borthwick expertly marshalled his Saracens troops.

Saracens exerted their dominance right from the start and Tomkins was first to cross the try-line as the home side were caught cold by a tap-penalty on 16 minutes.

Edinburgh were out-of-sorts at set-pieces and their chances of finding a foothold in the match were further diminished when captain Greig Laidlaw and top-scorer Tim Visser were lost to injuries at half-time.

The home fans were on their feet as Richie Rees was caught 10 metres short of the line after a lung-bursting run from deep inside his own half, with Schalk Brits sin-binned for not releasing the downed scrum-half.

Despite losing a man, Saracens held firm and Hodgson nailed a long-range penalty to extend their lead.

Having been on the field for less than a minute, Farrell was celebrating the visitors' second try as he ploughed over in the corner just before the hour.

Soon after, Ashton brushed aside a couple of weak challenges to dive in near the posts.

A wonderful flowing move then diced through the wilting home defence, with Goode providing the final flourish.

And Hodgson capped an impressive individual display by blocking an attempted clearing kick from Leonard and strolling in for a richly-deserved try.

Saracens director of rugby Mark McCall: "That was very nice to be able to push on in the second half.

"In the Heineken Cup a win is vital in the opening game but to get the extra point from scoring those tries was a real bonus.

"Edinburgh are a difficult team to play against. It was a huge credit to our boys that Edinburgh were shut out in the game."

Edinburgh coach Michael Bradley: "It's hard to put into words what I feel. We knew the systems they would employ, but my guys didn't play to our game plan.

"Instead of kicking the ball beyond the line of Saracens players, they insisted on running into the dragon's den - we could have been beaten by more."