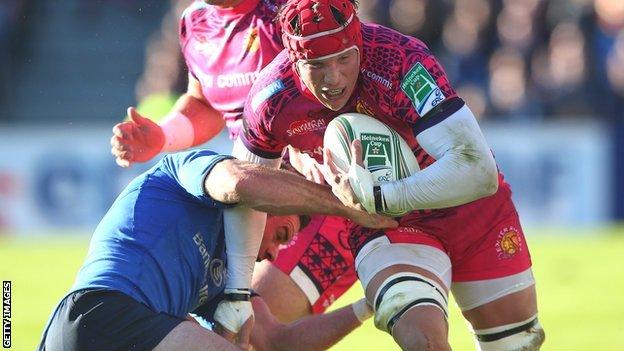 Chiefs matched the three-time European champions throughout, but their brave resistance was finally broken by Jonathan Sexton's late penalty.

Ignacio Mieres had a chance to snatch a draw with the last kick of the game, but his long-range effort drifted wide.

The sense of relief from the home side and their supporters was palpable after a nervy performance in their pool five opener.

Chiefs played with all the confidence of a side who last week beat reigning Premiership champions Harlequins and will feel they were good value for at least a share of the points.

Leinster, who have only lost once at home in seven years in the Heineken Cup, started in encouraging fashion and Sexton missed with a simple penalty chance before he slotted a more difficult kick to put the hosts on the board after 11 minutes.

However any thoughts it would be the platform for a routine home success were soon dispelled.

The visitors responded in style, with their powerful pack retaining possession and earning good territory up front, and a pacy backline showing fine handling skills.

Steenson missed a chance to level and also went close with a well-struck long-distance penalty.

Leinster showed flashes of their quality and twice nearly went over in the first period following breaks by hooker Richardt Strauss and prop Mike Ross.

But Exeter stood firm and went in at 3-3 thanks to Steenson's first successful penalty.

The hosts threatened to pull away during the middle stages of the second half but once again Exeter refused to back down in the face of sustained pressure.

After adding one penalty, Sexton missed a tough kick that would have stretched the lead to 9-3 and, after he and Steenson had traded further kicks, Exeter piled forward in the closing stages.

But with time up, Mieres's missed kick proved their final chance.

Leinster head coach Joe Schmidt: "It was no surprise to us how tough they were to break down. As I've said all week, they are a formidable side.

"They are greater than the sum of their parts. They are a very unified group. They're well coached, well organised and hard to break down.

"Having said that, it's not often we get in the 22 four times in the first half, and get nothing from it. That's down to us, we have to be more accurate than that.

"We were a little bit inaccurate and we have got to be patient enough to build scores against a really good team."

Exeter head coach Rob Baxter: "We're disappointed not to win, but I'm pleased with the level of performance. We were good at times.

"We still made some mistakes that cost us a chance of what would be a very, very important win.

"There was a little bit of everything in the game. We're a little bit unfortunate not to come away with a win or a draw. At the same time, we are pleased with large parts of our game."