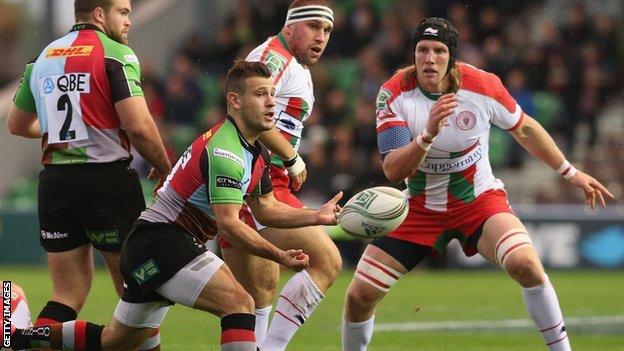 England scrum-half Danny Care gave an inspired display as Harlequins got their Heineken Cup campaign off to the perfect start thanks to a rampant second-half display against Biarritz.

Care set the tone for a compelling Pool Three game with an early try but Arnaud Heguy helped the French draw level.

However, Quins overpowered the visitors after the interval.

And they secured a bonus-point win thanks to tries from Rob Buchanan, Jordan Turner-Hall and Seb Stegmann.

The fourth try came in the final seconds, with the visitors appealing for the score to be wiped off for an infringement in the build up.

But although Stegmann's effort in the corner was controversial, Quins fully deserved the extra point for a blistering second-half in which they totally dominated their opponents and ran in 27 unanswered points.

Care was at his busy best and Ben Botica, on as an early replacement for the injured Nick Evans, slotted 18 points in a mature and impressive display at fly-half.

Care gave Quins the perfect start on his return to the side, darting through the visiting defence and touching down after a slick training-ground set-piece saw him fed possession by captain Chris Robshaw.

Ben Botica is the son of rugby league back Frano Botica, who won 18 major honours during a five-year spell at Wigan and became the fastest British-based player to reach 1,000 points, doing so in his 93rd game.

Evans added the extras, but his evening ended soon after when he appeared to twist his knee when his studs got caught in the turf.

The Premiership champions were playing with typical pace and attacking intent, and although Julien Peyrelongue got the visitors on the board with a penalty, Botica restored the seven-point home advantage soon after.

At 10-3 ahead, and with the French side temporarily reduced to 14 men when Dane Haylett-Petty was sin-binned following a late tackle, Quins seemed well set to push home their advantage.

But Biarritz stepped up a level, and their forward firepower and powerful pack began to get on top.

The two-time Heineken Cup finalists responded with a quality set-piece of their own - Heguy going over after a driving maul following another well-worked line-out.

A blistering start to the second half saw the hosts regain the lead. Some impressive handling across the backs stretched the Biarritz defence, and after another trademark break from Care, hooker Buchanan kept low and bundled over from close range.

The home side threw the ball around in search of a game-clinching third try and their willingness to take risks meant the French team who were missing key men Dimitri Yachvili and Imanol Harinordoquy, had several opportunities on the break.

But Botica's fourth penalty gave Quins breathing space at 26-13, and another breathtaking break from Care eventually led to Jordan Turner-Hall crossing over in the corner.

The hosts poured forward in search of the bonus point and it arrived courtesy of Stegmann's late score.