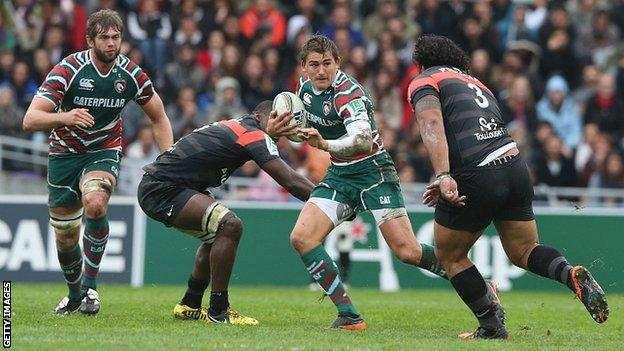 The Tigers were only 11-9 behind at the break after a late first-half try by 18-year-old centre Gael Fickou.

But Leicester's scrum began to creak after the break and Toulouse fly-half Luke McAlister was unerring with the boot, finishing with 18 points.

On Friday, Celtic League champions Ospreys secured a bonus-point victory over Italian side Treviso to lead the pool after the opening weekend.

Sunday's match was the seventh meeting between Toulouse and Leicester in the Heineken Cup, with both sides victorious on three occasions previously.

And it was two-time champions Leicester who made the brighter start, despite grim conditions at Le Stadium.

Toby Flood had a clear-cut scoring opportunity after seven minutes when he collected a scuffed clearance by Toulouse full-back Clement Poitrenaud and darted for the corner.

The England fly-half was thwarted by a fine tackle by Jean Marc Doussain but perhaps should have stepped inside.

Flood kicked the visitors' first points after an infringement at the breakdown by Louis Picamoles before Dan Cole was penalised for interfering, allowing McAlister to level.

Flood restored Tigers' lead with another three-pointer but, when he chose to run at the Toulouse defence from inside his own half and gave away a penalty, McAlister levelled again.

After 28 minutes, Toulouse prop Gurthro Steenkamp was sent to the sin bin for a trip on Scott Hamilton, which gave Leicester, who already had the edge at the set-piece, even more leverage.

And when Toulouse were penalised again after disintegrating in the scrum, Flood made no mistake with a long-range penalty attempt.

However, when Thomas Waldrom spilled the ball two minutes before half-time, Heineken Cup debutant Fickou gathered his own kick and outpaced Anthony Allen to give the hosts the lead at the break.

McAlister extended his side's lead after another needless infringement at the breakdown by Tom Youngs before Ben Youngs declined a penalty in front of the posts, choosing to tap and go instead.

The decision was a pivotal one. Toulouse powered Leicester backwards from the resulting scrum before former All Black McAlister made it 17-9 with another unerring penalty.

A couple of minutes later, Picamoles picked up from the base of the scrum and triggered a rare sweeping move, which led to another McAlister three-pointer.

With Leicester's scrum creaking badly the penalties continued to flow and McAlister popped over his sixth penalty midway through the half.

Only a tremendous piece of defending by Matt Smith prevented Yoann Huget going over with six minutes remaining but a clinical Toulouse had already done more than enough.

"I'm very disappointed with what happened before half-time. To cough up the ball for a soft try like that was disappointing.

"We were still very much in the game at half-time at 11-9, but if you get a penalty in front of the posts you should take it. It was a huge moment at 14-9 when Ben Youngs took a quick tap penalty.

"Naive at times is probably the right description of us. We also conceded seven penalty shots at goal and even though some of the decisions were a bit harsh, they were also down to ill-discipline.

"We lost our composure and once they get on top they are a hard side to contain. I'm bitterly disappointed with the bits of the game we could and should have controlled."