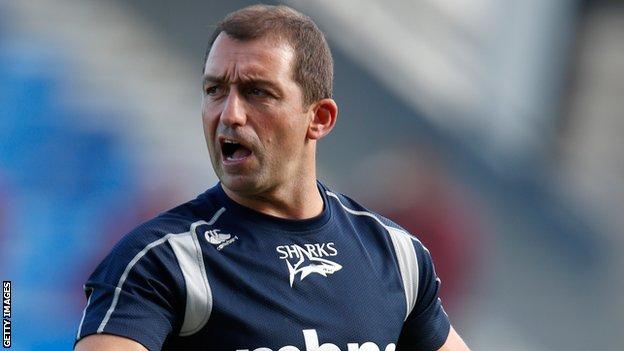 Director of rugby Bryan Redpath believes bottom of the table Sale can be confident going into their opening Heineken Cup match against Cardiff.

The Sharks take on the Blues in Salford on Sunday after losing all six of their opening Premiership fixtures.

But Redpath was encouraged by the performance in the 8-20 defeat by Leicester last Friday.

He told BBC Radio Manchester: "I was massively heartened by their attitude and desire."

We have to show that mentality in every game, starting with Cardiff on Sunday, and get that first win

After the game Leicester director of rugby Richard Cockerill said Sale would quickly start to climb the table if they continue to play with the commitment they showed against the Tigers, and Redpath agreed.

"I'm a lot happier - when we raised the tempo of the game against Leicester we looked pretty dangerous," said the former Scotland international.

"Richard has been in a similar situation in that Leicester lost five of their first six games last season. Obviously their squad is stronger than ours, but if we keep playing that way we shouldn't be down at the bottom.

"We have to show that mentality in every game, starting with Cardiff on Sunday, and get that first win. It's little things we need to go our way. When things are tough they're tough, but we have to stay strong together."

Redpath was particularly pleased with the performance of some of the club's younger players against Leicester, including 20-year-old hooker Tommy Taylor and 19-year-old scrum-half Nathan Fowles.

"Tommy had a great game playing against a strong scrum, and I thought his throwing was good in the line-out, his detail was good and he was good over the ball in the contact area. He's a Sale lad and it was great to see him perform the way he did.

"Young Nathan has just come on the scene, it was his second outing for the first team and I see a lot of positives in him - he and Cillian [Willis] worked well together with Dwayne Peel injured."

Sale's other group opponents in the competition are French giants Toulon and Montpellier.

The club has not confirmed reports they have agreed a six month deal with their former director of rugby John Mitchell to replace the sacked Steve Scott as forwards coach.

The abrasive 48-year-old former All-Black went on to become part of Clive Woodward's England coaching set-up before moving on to coach his country.

A spokesman said no immediate announcement was planned.

Sale had hoped that Redpath's appointment, coupled with the move to a new stadium in Salford and the signing of some high-profile players, would launch them towards the top of the Premiership.