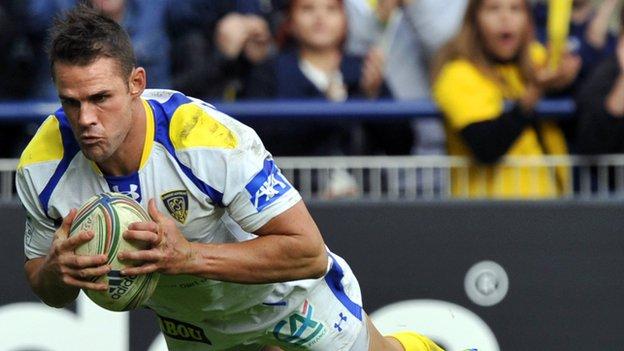 Clermont Auvergne scored six tries as they saw off the Scarlets in the Heineken Cup at Stade Marcel Michelin.

The French club's Welsh full-back, Lee Byrne, was among the scorers against a team reduced to 14 men following Morgan Stoddart's 37th-minute banishment.

Centre Jonathan Davies went over first for the visitors.

The visitors had the better of the opening exchanges, taking the game to the French club.

Scarlets' intentions were as clear at close quarters as they were in the open spaces.

There was an edge to the visitors' approach that played a part in some early off-the-ball incidents that left no-one in any doubt that they no intention of being intimidated or overawed.

However, setting out their stall, the Scarlets ended up on the wrong side of a rugby lesson - not helped by Stoddart's double yellow card.

Clermont's dynamic attacks from line-outs and ability to create and exploit space out wide made for a largely uncomfortable afternoon for the Welsh side.

The Scarlets were game for the battle until the final whistle, but were simply outplayed and outclassed for much of the afternoon.

Even so, coaching boss Simon Easterby's side underlined their threat with ball in hand as early as the fourth minute when Wales centre Davies went over.

Wing George North drew defenders as he came infield, paving the way for Priestland's pass to give Davies the chance to alter the angle of attack before using his power and pace to reach the line.

Priestland converted, beginning a kicking duel with Parra that favoured the Frenchman.

Priestland dropped a goal as the visitors maintained their momentum.

But the initiative swung to the home side when a clever line-out ploy put Parra into space.

Sivivatu was on hand to finish off a polished move and Parra converted.

When Stoddart held on to the former New Zealand All Black wing a metre from the line, Irish referee Peter Fitzgibbon had little choice but to issue the second yellow card that reduced the Scarlets to 14 men three minutes before the break.

Parra's boot also punished Stoddart's indiscipline for the hosts to lead 16-13 at the break.

Clermont's forward power earned them a penalty try from a scrum soon after the break.

Then Byrne reminded Wales' selectors of his attacking threat with a wrap-around run off Sivivatu to tiptoe at top speed down the right touchline before crossing.

With the outcome not in doubt, the Scarlets stuck still stuck to their task.

But when North was free on the right, Scott Williams sent a wayward pass that the wing was unable to gather and the chance was gone.

Williams then departed with a limp, as had flanker Aaron Shingler, and fortunes continued to favour the hosts as Bonnaire was freed by Byrne's final pass.

Nalanga intercepted as the visitors attempted to make a late mark on the encounter to end the contest.