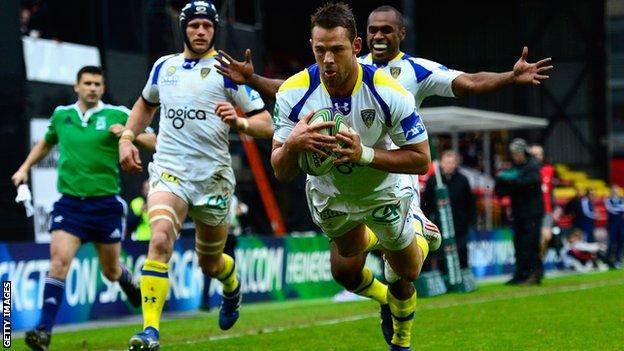 Welsh rugby's future and past will collide on the European stage this weekend, with some intriguing head-to-heads between home-based players and those now in exile.

The Scarlets' visit to Clermont, the Cardiff Blues' clash with Sale Sharks and Newport Gwent Dragons' trip to face London Wasps may seem like any other European ties, but this season they offer a glimpse of the Welsh regions' new austerity plan.

Last season, the regions announced a £3.5m salary cap for the Heineken Cup and Amlin Challenge squads for the 2012/13 season.

Since then, a host of experienced international players have left.

The Welsh Rugby Union has welcomed Wales' new salary cap, which goes beyond the £4.5m in England's Premiership and the £7.1m in France's Top 14.

While still keen to keep the best players, Gallacher also said: "One of the benefits of this salary cap, I believe, is it gives us more scope and more finances within the regions to keep developing our own younger players as we saw in the World Cup."

The opening rounds of European rugby this season features a number of player duels which will offer a real insight into Welsh rugby's new 'homegrown' policy.

The Dragons' trip to face London Wasps offers is probably the most striking example.

Two high-achievers - Stephen Jones, Wales' most capped player, and Nicky Robinson, a 13-times capped Welsh international, are competing for the No 10 jersey at Wasps.

Meanwhile the Dragons have 21-year-olds Steffan Jones and Lewis Robling vying for the same role at Rodney Parade.

Robling is a Wales Under-20s international and an example of the regions' new approach, while Wasps are in a position to attract the experience and track records of Jones and Robinson.

"They are both internationals and it's just such an opportunity for us as young players to really have a go and see where we are in our careers," said Robling, on the prospect of facing Jones or Robinson.

"It's such an opportunity to match ourselves up against the best in the game."

One of the more intriguing personal battles is that of Scarlets young full-back Liam Williams locking horns with Lee Byrne of Clermont at the Stade Marcel Michelin.

Williams is breathing down the neck of Wales' first-choice full-back, Leigh Halfpenny, and replaced Byrne in the Wales squad for the recent tour of Australia in summer 2012.

The 21-year-old Williams has the swagger of a young player who has just won his first Wales cap but nobody should doubt Byrne's determination to prove he still has what it takes at the highest level.

Byrne, 32, has won 46 Wales caps and played a Test for the British and Irish Lions in South Africa in 2009 and was part of the Clermont side knocked out of last season's Heineken Cup in the semi-final stage by eventual winners Leinster.

"Lee has been there and done it when it comes to Wales caps and has played for the Lions," said Simon Easterby, Scarlets coach.

"Liam is a young boy who has come on leaps and bounds and we are really positive about the future he has in the game, while Lee is coming to the end of his career but I am sure there is plenty of fight in him."

Andries Pretorius and Andy Powell provide another sub-plot in the Sale Sharks versus Cardiff Blues clash. The South African number eight, who qualifies for Wales on residency grounds on 1 December, was in the Blues Academy while Powell was in the first team.

"There is a bit of a transition period now, regarding the financial status and that is something all the regions are going through," said Pretorius, who is new Cardiff Blues captain.

"But at the same time there is a lot of talent coming through, and you just have to look at Wales and three Grand Slams and you cannot argue with that."