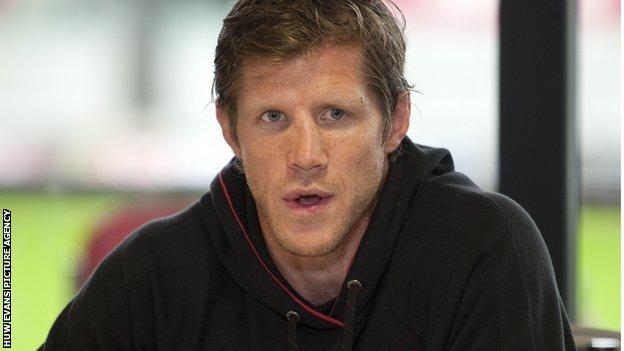 Scarlets coach Simon Easterby has called for a positive approach from his players ahead of their difficult trip to play Clermont Auvergne in their Heineken Cup opener on Saturday.

The French club have not lost at Stade Marcel Michelin in 47 matches in all competitions.

But Easterby has experienced victory in France as a player and as a coach.

"In all the games we have won in France you have to have a positive mind-set," he said.

"If you go there and try to defend, and hold on for as long as you can, and sneak a win it doesn't really happen.

"So it's a combination of not playing too deep and getting turned over, and causing yourself undue stress, but also being positive and having a go.

"And making sure when you have got the likes of George North, Morgan Stoddart, Liam Williams, Jon Davies, Scott Williams in the backline you have got to use them.

"To do that you have to set the platform so the key is making sure the forwards give us parity up front and when it's on we play.

The Scarlets, who also face Leinster and Exeter Chiefs in Pool 5, started the RaboDirect Pro12 with three wins before losing their next two, but they go to France on the back of a 24-13 victory over Newport Gwent Dragons.

"We go down there with a great deal of confidence. We have a fit squad which is always good to pick from.

"We realise their [Clermont's] obvious quality especially at home. If we go there with a positive mind-set - we've done it before, winning away in France - and there is no reason why we can't start this weekend."

One of the forwards who could give the Scarlets the necessary forward platform is Wales Under-20 prop Samson Lee who won the man of the match award against the Dragons.

"[He] Samson was excellent and someone we have got high hopes and expectations for. His scrummaging is his priority and it's a big weapon of his as a tight-head.

"He is a small guy in terms of stature but he is very aggressive in that scrum and what he did do was he was able to set a real strong platform and wins some penalties.

"He is very well not only in the tight but he offered himself in the loose as well.

"He is a strong boy and he is very confident in his own ability and we feel he is only going to get better this season and in the future."