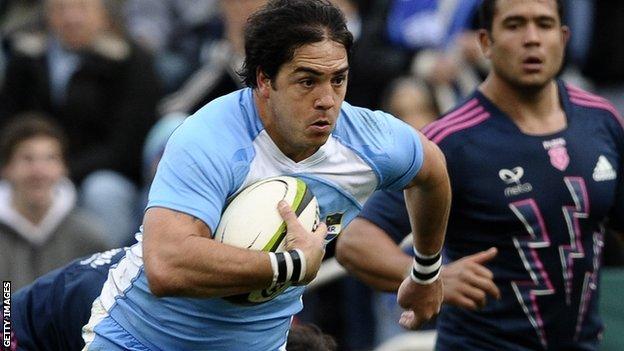 Agulla, 27, agreed a move in the summer but has yet to make his debut because of his international commitments with Argentina in the Rugby Championship.

The former Leicester man arrives in Bath next week and will add depth to the back line which already boasts in-form wings Tom Biggs and Kyle Eastmond.

"It will provide us with a much-needed boost," Booth told BBC Radio Bristol.

"We need to bolster our squad size and numbers as we're a little bit thin.

"We want players to be under pressure to be selected because that's how you get the best out of people."

Agulla has 40 caps for his country and played 33 Premiership games during his two-year spell at Welford Road.

Bath also welcome back South Africa flanker Francois Louw, who has returned from the same competition.

Louw, who has made just one appearance for his club so far this season, is likely to feature in their Amlin Cup game against Bucharest Wolves on Saturday.

But he is set to be absent again when he rejoins the Springboks for their autumn internationals next month.

"It's a frustrating thing from a Bath perspective," added Booth. "But I know all the supporters, and the club internally, wish Flo all the best.

"He represents Bath and represents success by being included. We want Bath to be connected with success and it will reflect well on everybody."