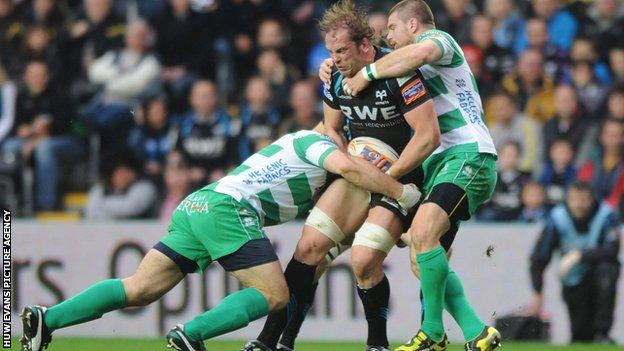 Shane Williams has warned the Ospreys to prepare for a 'dangerous' Treviso side at the Liberty Stadium.

The reigning Pro12 champions kick-off their Heineken Cup campaign against the Italians on Friday night.

Williams, who left the Ospreys last season and is now playing in Japan, believes his former side will grind out a victory in Swansea.

"I think Treviso are a dangerous side to play," said Williams, Wales' record try-scorer.

They [Treviso] will be full of confidence after some good wins this season, it is a tough one for the Ospreys.

"They play some rugby and can score tries and have dangerous attackers. They will be full of confidence after some good wins this season. It is a tough one for the Ospreys."

"It was quite a poor start for the Ospreys, losing to Treviso, even if it it is a tough place to play and they have been progressing year-in and year-out."

The Ospreys suffered their first defeat to an Italian side when they lost 12-6 to Treviso at the start of the current Pro12 campaign.

The Scarlets face the most daunting trip of all the Welsh regions when they take on last year's semi-finalists Clermont Auvergne in France.

The Welsh side have a good record on French soil, having beaten Castres in last season's tournament and their most famous Heineken Cup victory was in Toulouse in 2006.

Williams believes the Scarlets will do well to get anything from their trip to France but admits they are the one Welsh side which is capable of victory on French soil.

"Clermont is the one place you do not want to go to at the moment," said Williams.

"Their home record is probably the best of any European side. They have a great squad and great strength-in-depth and they are a dangerous outfit, especially at home

"Having said that, we know the Scarlets have gone to tough place before and won. They have won in Toulouse before.

The Cardiff Blues, who reached last season's quarter-finals, travel to face the Sale Sharks in Pool 6 with both sides desperate to put their poor starts in their respective domestic leagues behind them.

Williams admits the game is too close to call but believes the Blues will not have a better chance to get a win on English soil.

"Both sides are desperate for a win and haven't played to their full potential," said Williams.

"They should be doing much better but it's an interesting match-up and I cannot call it.

"I just hope the Blues can do a job there and if there is a good time to go to Sale, it is now."