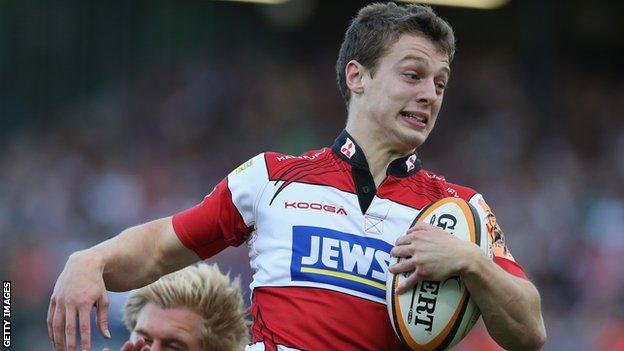 Gloucester held on for a hard-fought win over French side Mont de Marsan after flanker Andy Hazell was sent off.

The former England international was shown the red card for punching and using a knee after 56 minutes of the Amlin Challenge Cup tie.

Matt Cox was sin-binned at the same time, forcing the Cherry and Whites to play with 13 men for 10 minutes.

Ian Clark dived over for the game's only try in the 29th minute on a night affected by the wet conditions.

Tim Taylor missed two penalties before Clark broke the deadlock, pouncing from close range just seconds after former Scotland lock Scott Murray had started a 10-minute spell in the sin bin for the home side.

Taylor could not convert Clark's try but extended Gloucester's lead with a penalty 12 minutes into the second half.

The French side were on the scoreboard shortly afterwards when Jean-Baptiste Claverie kicked a penalty. Billy Twelvetrees, on for Taylor, put Gloucester eight points ahead once more with a penalty just after the hour.

Claverie reduced the arrears with four minutes remaining with another penalty, but a young Gloucester side hung on to open their Challenge Cup campaign with four points.

Gloucester director of rugby Nigel Davies said that his club were likely to lodge an official complaint over a number of incidents which he felt provoked Hazell.

"We can't condone what was done from a Gloucester view, but that was a reaction to what went on before," said Davies.

"We will take our punishment, but I think they need to take their punishment too.

"The doctor's had a look at Andy's eye. It was severely sore and very red.

"And we took some pictures of that, because that was damning evidence in its own right.

"He's disappointed with himself, but I think there were three incidents before that with the same player and he's caught him off the ball again, and unfortunately Andy snapped."