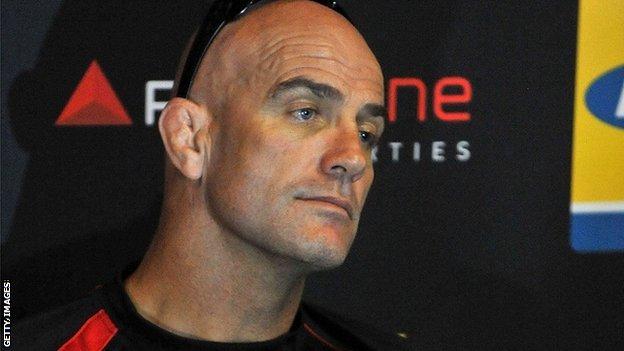 Sale have not won a game this season and are bottom of the Premiership.

Diamond told BBC Radio Manchester: "I feel John is the man to work with [director of rugby] Bryan Redpath."

Mitchell, 48, was formerly director of rugby at Sale and became part of Clive Woodward's England set-up before moving on to coach his country.

"We're talking to John about potentially coming to join us and the negotiations have gone well," said Diamond.

"He is coming to the end of a contract [with the Golden Lions] in South Africa and hopefully he will come and do some consultancy for us in the short-term and then look to make it a permanent move.

"Once the immigration and work permits are sorted out we'll sit down and get the deal done.

"John brings a wealth of experience and a rod of iron that rugby teams do need. You need a bit of steel running through your body when you go out to win games.

"As a combination I feel John is the man to come in and work with Bryan Redpath and bring that back to the fold."

Diamond, who has returned to his former coaching role with the club after sacking forwards coach Steve Scott, believes the 48-year-old can help Redpath turn Sale's fortunes around.

"There isn't one thing that's going wrong, it's a combination of a lot of things. Our scrum will hold out for 70 minutes and in the last 10 minutes it gets a bit of a pasting, so the whole generic way we play has got to be looked at and finely tuned."

Diamond insisted Mitchell and Redpath can work together.

"I think Bryan is old enough and has been round long enough to know it isn't a one-man job. The raft of experience John brings, anyone would be foolish not to accept that.

"We've all hung our egos on the door - the club has come a long way in 18 months to two years, and all the hard work we've done I don't want to throw away. All the coaching staff will enjoy working with him."