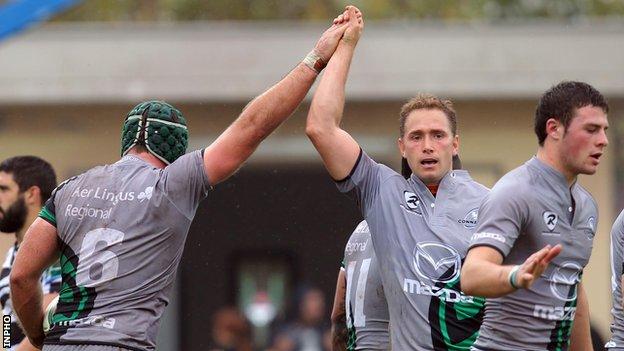 Connacht got their Heineken Cup campaign off to a winning start with a scrappy victory over tournament newcomers Zebre in Parma.

John Muldoon's 62nd-minute try finally enabled the Irish side to turn their second-half superiority into points.

Daniel Halangahu missed a couple of crucials penalties for Zebre who had Mauro Bergamasco harshly sin-binned.

Connacht's early endeavour was rewarded with a fourth-minute penalty from Parks but that proved to be a rare first-half venture in Zebre territory for the Irish outfit.

For the remainder of the half most of the play belonged to the home side as they used their solid line-out platform to build pressure.

The Zebre full-back missed two other kicks at goal during the first half and after 17 minutes, Connacht turned a brief foray into home territory into three more points from the boot of Parks to restore their lead.

On the stroke of half-time, the vastly experienced Bergamasco was penalised for a tackle on Tiernan O'Halloran that was somewhat harshly deemed to be a 'tip tackle'.

Referee Leighton Hodges sin-binned the 93-times capped Italy international and Parks kicked a brilliant penalty from the halfway line for a six-point buffer at the break.

On the hour mark, Eric Elwood's men earned a penalty from a five-metre scrum after sustained pressure and opted to stretch the lead to two scores through the boot of Parks.

That settled nerves and barely two minutes later a turnover in the Connacht 22 led to the game's first try with Muldoon scoring after taking a quick tap penalty.

Zebre replied with a converted try from replacement flanker Filippo Ferranini in the 72nd minute, but the hosts could not get any closer in the remaining time.