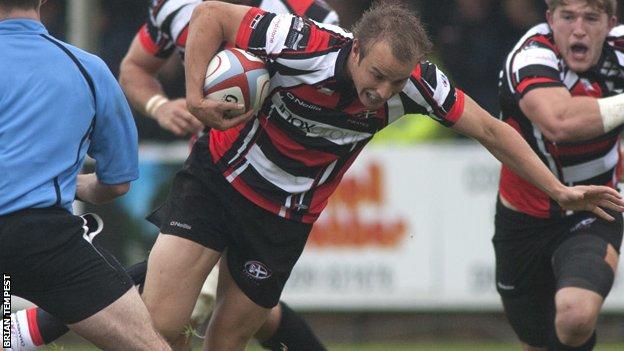 The Pirates were 20-13 down at half-time before securing a 44-32 victory in their British and Irish Cup tie.

"It was angry to be honest," Biljon told BBC Radio Cornwall about the half-time team talk.

"We were tired of making stupid mistakes and stupid decisions and it was time for the boys to step up."

Aiden Laxton put Carmarthen 7-3 up with an early try before Alex Cheesman's score put the home side ahead.

But two more Carmarthen penalties and a try from Richard Wilkes helped the Quins to a seven-point lead at the break.

Tom Kessell's try seven minutes after the re-start drew the scores level before Laurie McGlone, Wes Davies and a second for Kessell sealed the win.

"We were very focused in the second half but disappointed to allow them in for two late scores," Biljon added.

"It's something we'll talk about this week, why do we put our foot on the pedal and then take it off.

"We've got to be ruthless, when we start to go we need to keep building on that pressure and that momentum."