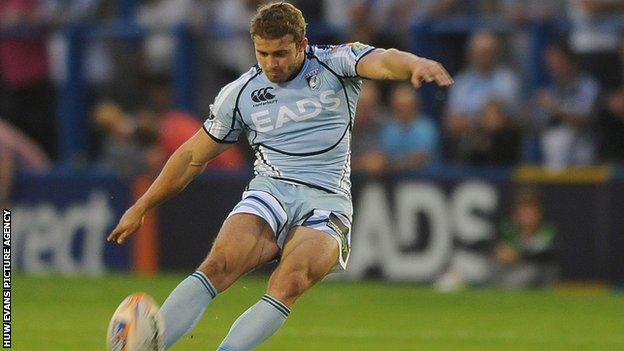 Leigh Halfpenny has warned Cardiff Blues to expect a "wounded animal" when they face Sale Sharks in their Heineken Cup opener.

The Welsh region, who reached the quarter-finals last season, travel to Salford face a Sale side still looking for their first win of the season.

But the Wales and Blues kicking machine is expecting a backlash when they meet at the Salford City Stadium on Sunday.

"They have lost six games and they are wounded animal," said Halfpenny.

"That is why they are dangerous because they will put things right in front of their own fans."

Sale are a physical team and compete at the breadown heavily and they get in your face in defence. They will be coming at us because they are at home.

Halfpenny has struggled with a series of bumps and bruises this season, including a niggling ankle injury and a bang to the head which forced him from the field during the Blues 18-3 home defeat by Glasgow in the Pro12 last weekend.

But the 23-year-old, who has made 35 appearances for Wales and is a favourite for the British and Irish Lions squad to tour Australia in 2013, has been given the all-clear for the Pool 6 opener.

The Blues and the Sharks will both be desperate for a victory and looking to start of their campaign in the right manner, with the visitors having lost their last two games in the Pro12.

Halfpenny, who has lifted the Anglo-Welsh cup and the Amlin Challenge Cup with the side from the Welsh capital, expects the English side to provide an intimidating and physical challenge.

"Both teams are going in on a loss and both of us will be looking to put that right," said Halfpenny.

"Sale are a physical team and compete at the breadown heavily and they get in your face in defence.

"They will be coming at us because they are at home.

"We need to go there with the same attitude and same intensity and match them and take it to them.

"If we do that, stay error free and do everything accurately then we will have a good chance of coming away with a result.

"We are creating opportunities but we are not finishing them.

"If that all comes together, I am sure we will be competing right up there with everyone."

The Blues welcome back Wales captain Sam Warburton to the starting line-up after he recovered from a hand-injury.

Fellow Wales team-mates, lock Bradley Davies and wing Alex Cuthbert, are also drafted into the side.