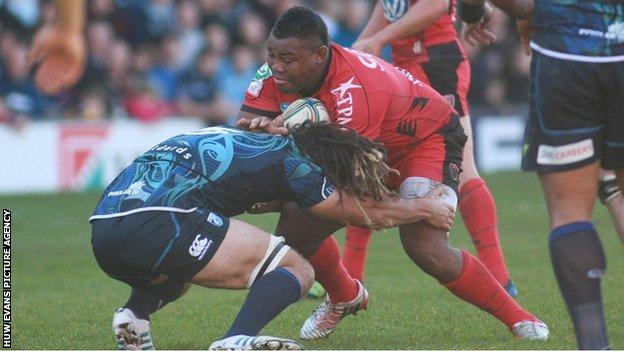 After throwing away a 15-point lead to lose their Heineken Cup opener at Sale last week, Blues needed a win at home to stay in contention.

The Welsh side struck early when Leigh Halfpenny went over and the full-back also kicked three penalties.

Toulon - who had seen off French rivals Montpellier in their opener - started fiercely at the Arms Park, with centre Mathieu Bastareaud in particular scattering Blues defenders in his wake.

But the French big-spenders were hit with a sucker-punch as Blues launched a skilful counter from a scrum in their own 22.

"A lot of the Toulon players came here with big reputations but they didn't play up to them. I thought Mathieu Bastareaud looked very lazy, very tired, and very heavy - he was not gliding at all. But they came away and got a victory in the Heineken Cup. I am sure they will be happier when they get the Blues out there

The Wales full-back was just wide with the conversion of his own try, however, and two Wilkinson penalties soon after saw Toulon nose in front.

Blues were still finding space on the wings to work with when they managed to get their hands on the ball, with Alex Cuthbert looking dangerous on the right.

The home side lost tight-head Benoit Bourrust to injury early, forcing Blues to bring Welsh youngster Scott Andrews on and face his former Blues team-mate Gethin Jenkins in the Toulon number one shirt.

The crowd howled for Armitage to be sent off but replays showed clearly that Evans had slipped going into the tackle and the blow to the head was accidental, although referee George Clancy still awarded a penalty despite keeping his cards in his pocket.

Fortunately Evans had recovered sufficiently by the second half to emerge onto the sidelines and watch his team-mate's efforts.

Despite Toulon's glut of possession Blues' first-up tackling, led by their back-row, had been impressive throughout to keep the French side in check and Halfpenny had the last word in the first half as the full-back stroked over a kick for a slender 8-6 lead.

Two Wilkinson penalties edged Toulon back into the lead soon after the restart but Halfpenny thumped a kick between the posts to narrow Toulon's lead to 12-11.

With 15 minutes remaining Toulon struck a crucial blow to finally put daylight between the sides, as forwards and backs combined to send Giteau arcing for the line.

Halfpenny chopped down the Australian just short, but Steffon Armitage was on hand to barge over for a converted try.

Blues suffered another blow when Warburton was forced off with his nose streaming blood and the disparity in resources between the two sides was underlined as Toulon coach Bernard Laporte sent on props Carl Hayman and Andrew Sheridan, two of the most destructive scrummagers in world rugby.

Yet Andrews and Tafa'ao Filise rose to their task magnificently and from a scrum earned a penalty that Halfpenny gleefully converted to give Blues a sniff of victory.

But from the restart Blues undid their good work by coughing up another penalty and Wilkinson restored Toulon's two-score advantage to seal the win.

View from the changing room

Blues coach Phil Davies: "There's a lot of pride and a lot of frustration because for 80 minutes we stuck in there and performed superbly well.

"We gave ourselves a platform to potentially win the game, and but for a bit of inaccuracy and field position we could have beaten one of the strongest squads in Europe.

"That would have been a huge plus for our young group. But we gave away a couple of cheap penalties and that was a bit frustrating."