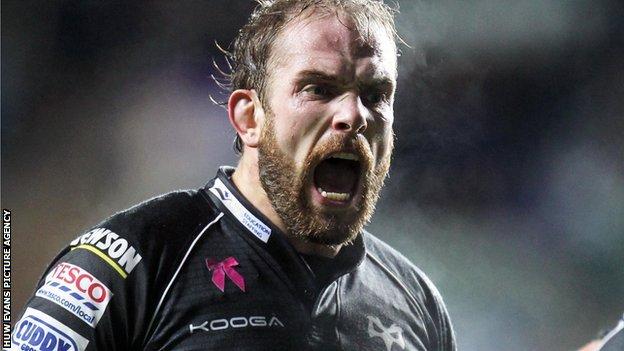 Shanklin told BBC Radio Wales the Blues had made telling mistakes during their 34-33 defeat at Sale.

He felt the Scarlets' task in Clermont Auvergne was tough enough even before Morgan Stoddart's sending off in their heavy loss.

"But we've still got a good chance with the Ospreys," said Shanklin.

Leicester lie in wait for the Ospreys on Sunday at Welford Road, following their 23-9 defeat in Toulouse.

Shanklin said: "The Ospreys have done well, but it was always going to be a huge task for the Scarlets to beat Clermont.

"And the Blues should have won this game [at Sale]- the best chance they've probably got of winning an away fixture.

If you're going to put money on a team being able to score from their own line, it would be the Scarlets

"So a little bit disappointing [overall]."

Shanklin highlighted key moment that saw the Blues go from being 24-9 ahead two minutes before the break to losing at Salford City Stadium.

He felt eight-cap Wales scrum-half Lloyd Williams, 22, should not have been replaced by Lewis Jones, 19, who was sin-binned three minutes after coming on for his fifth Blues appearance in the 70th minute.

And Shanklin admitted he was among many who were "baffled" by skipper Andries Pretorius' "bad decision" to ask Leigh Halfpenny to kick for goal when awarded a penalty with two minutes left instead of going for a try.

"I'm not quite sure, to be honest [what was going through Phil Davies' mind when he took Lloyd Williams off].

"You're taking off an international player.

"We don't know what the situation was with Lloyd, possibly he could be tired.

"But still you're taking an international player off, bringing on Lewis Jones, who's a youngster, a great prospect.

"But you're losing that experience and that proved costly because then Lewis Jones was sin-binned on 73 minutes and to try and come back then, with 14 men running out of your own half is tough.

"You think about the penalty opportunity, just inside Sale's half, they were four points behind, they decide to go for a kick for goal, which they did.

"But then they had a minute to run the ball all the way from their own 22 with 14 men, all the way up to near around the half-way line to try and get a penalty for Leigh Halfpenny to kick.

"It's a huge ask and strange decisions."

The 2005 British and Irish Lion and double Wales Grand Slam winner says the Ospreys can base their challenge around "one of the best packs in the northern hemisphere".

He added: "The Ospreys did, well, very well. And it's nice to see some of the players like Ashley Beck and [Richard] Fussell doing so well.

"Fussell came from the Dragons a couple of seasons ago and has played very, very well… and Dan Biggar also.

"He's put a few very good games together and could be in with a shout of playing 10 for Wales.

"The Ospreys have a very solid pack. They've got a well-established front-row.

"They've got experience everywhere and I think it is Wales' best chance in the Heineken Cup.

"They didn't start off the season great, but they do have a lot of class in their squad.

"They've got a lot of great players and, more importantly, they've got one of the best packs in the northern hemisphere.

"And that makes a huge difference in Heineken Cup rugby, especially when you've got to travel to these French teams and scrummage all day against them."

The Scarlets also impressed Shanklin, who sympathised with Stoddart after the wing was sent off for two yellow-card offences on his second full appearance since returning from a broken leg.

"It's tough enough to go to Clermont Auvergne with 15 men, let alone with 14," said Shanklin

"And as we know they've got such a great record there, now 48 games without a loss since 2009.

"And Morgan Stoddart - I feel so sorry for him. He's been out for so long and just come back and he's too keen to get involved and that was the case.

"Just like all the teams, there are vulnerabilities, but they are one of the best teams on their day.

"If you're going to put money on a team being able to score from their own line, it would be the Scarlets.

"And they showed in the first 30 the way they want to run the ball and their intent and they can play some brilliant, brilliant rugby.

"But it's so difficult when you're playing with 14 men.

"They have strengthened their pack and their scrum, which will only improve the team because much like the Cardiff Blues they have some great backs."

Newport Gwent Dragons were also in action, losing 38-25 at Wasps in the Amlin Challenge Cup.