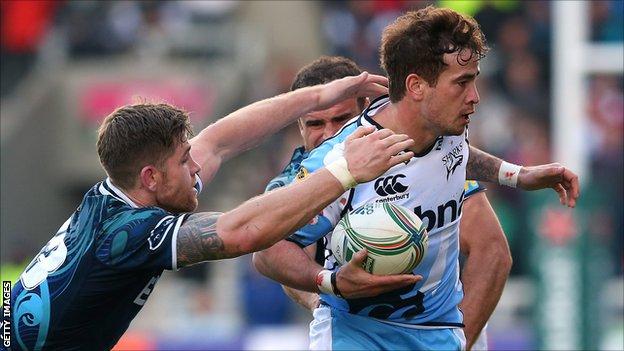 Danny Cipriani hopes his match-winning cameo against Cardiff Blues will be enough to earn him more starts at Sale.

The fly-half came off the bench to score a try as Sale came from 15 points down to their first win of the season.

"Every player wants to have game time and I've just got to fit into what the coach wants and needs," Cipriani, 24, told BBC Radio Manchester.

"Hopefully I put my hand up on Sunday. It's up to the coach now."

Cipriani, who after a spell in Australia with Melbourne Rebels, and Nick Macleod have been battling to start at fly-half for the Sharks in the early weeks of the season, with both starting three Premiership games.

"Nick is a great player and he wants that number 10 position as much as any player wants to be starting," added Cipriani. "If you've got two number 10s who are playing well, that's better for the team."

Sale are bottom of the Premiership after beginning the season with six consecutive defeats, and Cipriani, who has won seven England caps, believes the 34-33 win against Cardiff is the confidence boost they required.

"It's something we've been longing for as a club," he said. "I'm sure it's been frustrating as a fan to watch but they got right behind us when things were going well [in the second half].

"We don't want to get carried away with the win but we're hoping we can really move on from here now.

"If you were just watching that game, you wouldn't have believed they were so far up at half-time.

"We had three opportunities in the first half and we didn't put them away, but, with more confidence, we will do that and put them away when we need to."

Sale director of rugby Bryan Redpath added: "It was a huge relief. Huge credit must go to the players because I said to them at half-time that we had to go out and win the game, rather than expecting them to lose it. Credit to them all because it's been a tough six weeks."