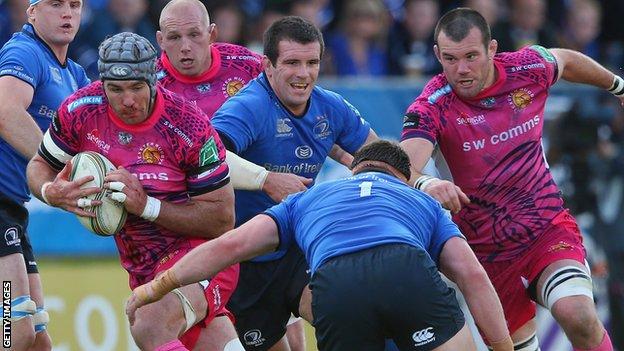 Exeter boss Rob Baxter has warned his players against being too confident after their performance against Leinster in the Heineken Cup.

The Chiefs impressed as they took a losing bonus point in the in Dublin.

"We've got to make sure we don't get a bit pleased with ourselves, think we've performed really well and then get stung next week," Baxter said.

"We've got to keep driving home the way we want to perform," he added.

Exeter had chances to go ahead as Gareth Steenson missed two first half penalties while Ignacio Mieres failed to convert a long-distance kick at the death.

"If your moments come you've got to try and take them, we created a few moments which we didn't quite see off," Baxter told BBC Radio Devon.

"For fighting spirit and working hard and playing some good rugby it had everything for us, apart from us perhaps not scoring a few more points."

The Chiefs' arduous run of fixtures, which has seen them face Saracens, Leicester, Harlequins and then Leinster, continues on Saturday when they host French side Clermont Auvergne at Sandy Park in search of a first Heineken Cup win.