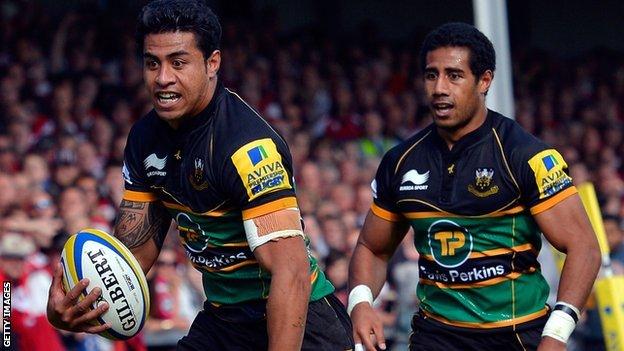 Northampton Saints winger Ken Pisi has said combining with brother George is reminiscent of their days playing in the back garden.

"I keep seeing him inside and having my back. I'm really happy with the try we scored," Ken, 23, told BBC Look East.

"It's just like how we used to play in the back yard."

Glasgow took a 15-0 lead at Franklin's Gardens but centre George, 26, went over before the Samoan pair combined for the second try, with Ken scything through the Scottish side before releasing his older brother to cross the line.

Two-time Samoa cap Ken is quickly demonstrating his ability in a Saints shirt, following up last week's with an influential display on his Heineken Cup debut.

"He's made a cracking start. He's growing into his role every single week," said Saints director of rugby Jim Mallinder.

"People questioned our wingers and I think both Ken and Vasily Artemyev are playing really well.

"I'm delighted Ken could back up last week's performance with another one."

Saints ran out 24-15 winners over Glasgow on Sunday, collecting a bonus point on the way.

On Friday they travel to Castres, who were soundly beaten 41-17 at Ulster two days before Northampton got their European campaign underway.

"It's going to be very tough now, only having five days to prepare," said Mallinder. "Castres have the advantage of seven days but that's what it's all about.

"We need to have a good week. We'll take them on in France and look forward to it."